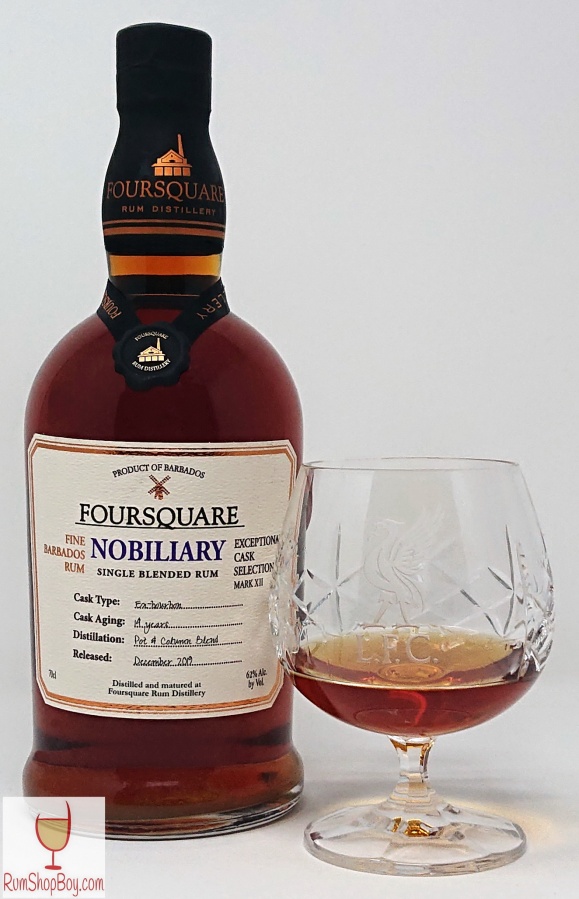 The latest in Foursquare’s Exceptional Cask Selections. Incarnation number 12 (XII) is Nobiliary “Of Noble Character” and at 62%, it is the highest ABV to date of the series and limited to 12,000 bottles worldwide. Aged 14 years entirely in the tropics.

According to Google, the name is “relating to the nobility.” Well I guess us Foursquarians © do look up to and worship the great Foursquare Nobility, kind of like a Lord and Lady on a country estate.

Now sometimes, I might look at such statements and wonder if it is just marketing bullsh*t, but seeing as we have a Foursquare rum here, there is nothing of the sort. If Foursquare believes that an open walled warehouse makes a difference, I am sure it does. What I do know makes a difference is that this rum is 100% natural – no added sugar nor caramel and it is unfiltered.

And as with Foursquare Plenipotenziario, this edition is aged entirely in ex-Bourbon casks. Quoting Richard Seale on this subject “So after many different casks I wanted to show what we could do with just ex-bourbon. Plenipotenziario is a 12 yr, distillate driven power rum, Nobiliary is 14 yr old mature classic Foursquare elegance.”

As a big fan of Foursquare, I have previously written on numerous occasions about my admiration of their processes and ethos. So let us see how the latest offering stacks up, given Foursquare’s reputation for perpetually out-rumming itself with each new iteration.

Foursquare Nobiliary is a Single Blended Rum:
A blend of pot still and traditional column still.

We have the usual style of bottle from the previous Exceptional Cask editions, although as with 2007, Hereditas and Sagacity, there is the wax stamp hung around the bottle neck with  “Foursquare Rum Distillery” emblazoned on it.

As always, we are treated to plenty of useful information:

The rear label states that the rum is “Non chill filtered” which will preserve more of the flavours. In addition, we have “Fully matured at Foursquare” meaning 100% tropical ageing that will have a positive impact on the maturing of this rum and finally “No sweetener, other flavour or colour has been added” that reassures anyone who dares to ask, that this is pure and additive-free rum. It is a shame that this has to be stated rather than enforcing things the other way round i.e. forcing additives to be named on a bottle.

As an aside, we have different colouring for the name:
Nobiliary is written in purple.

Nobiliary is a medium amber in my glass. The initial nosing is dominated with one thing…..

It takes me a few inhalations to get beyond that at first and using my Neat glass helped as my brandy glass (pictured) was full of alcoholic fumes. Some caramel, vanilla, nutmeg and black pepper are revealed with my Neat glass. Adding water leads to Nobiliary opening up notes of butterscotch, peppermint, cloves, raisins and tropical fruit.

But, my nose keeps going back to the oak
that dominates over everything else.

Surprisingly light for my first tasting – I was expecting a powerful fireball to explode. There is something akin to what I imagine varnish would taste like, and it is sweetish. As Nobiliary touches your tongue though, the powerful explosion that I expected arrives – just a bit later than I thought, leaving behind, spicy pepper, licorice, dry oak and sweet caramel.

Through the mid-palate the peppery fire builds but is balanced with the caramel, which almost feels a touch sticky. The oak presence follows throughout.

The mid-palate peppery fire continues to the rear – Nobiliary is fighting my tastebuds. But with a few more sips and a touch of water, Nobiliary’s gentler and far more elegant side comes out to play offering some sticky chocolate fruit notes. The oak is still there accompanied by plenty of black pepper, ginger, and capsicum. My tongue tingles with every drop of Nobiliary as a result.

Almost never-ending. Nobiliary’s oak and spicy pepper linger for minutes after swallowing. There is a dryness that builds, accompanied as always, by plenty of oak.

So, does this rum belong to the nobility? Is it “Of Noble Character?”

Well, in recent rum history, just about every Foursquare release stands out and is lauded by consumers, collectors and fellow rum-geeks. And this is no different!

There is a powerful fire in the belly of Nobiliary that defies its “noble character” or maybe it actually defines it. I think that the proportion of pot to column still distillate in Nobiliary has been ramped up compared to previous editions and that is accounting for some of the fire and power.

Overall, my initial impression was oak, oak and more OAK! It took me some time to get beyond that

But three-quarters of a bottle and a couple of weeks later and I am appreciating it much more than when I first opened the bottle, when I have to admit I was initially disappointed. In passing, I like to spend plenty of time with a rum prior to reviewing it – often a small sample is not enough as I try rums multiple times….. with ice, when it is sunny, when it is cold, before and after food, with added water, in different glasses etc.

The main reason for being disappointed is that this is the only Foursquare rum to date that I have found I prefer when I add water to it. Maybe I prefer my Foursquare rums aged in different casks or with a little more column still distillate added to the blend. But that is just me…..What is certainly not in doubt is the quality and character of this rum.

I tasted it alongside my all time favourite Foursquare, the 2016 Velier bottling of “2006.” The difference is marked even though they are both at 62%. “2006” is so much smoother and easier to drink. That said, maybe I will have to write about “2006” then. Hmmmmm, coming soon!

Roll on the next Exceptional Cask Selection. ECS XIII “2008” anyone?

Aged for 14 years entirely in the tropics, bottled at 62%, additive-free and £60. This is an absolute bargain. I think that if this was priced at £100, it would still be good value, not that I am suggesting they should increase the price.

NOTE: Yes, I know there are TWO oak symbols.
That is just how much oak I feel there is in Nobiliary.