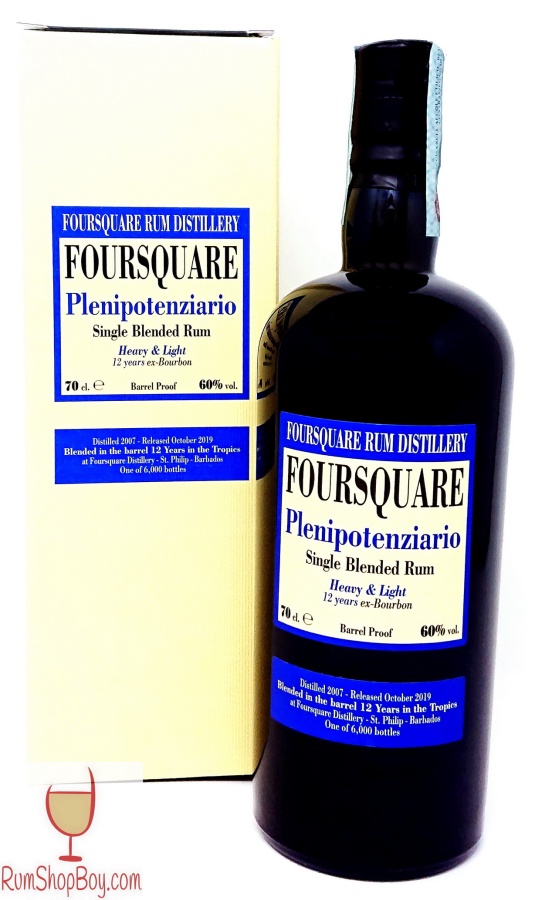 The latest in the exciting rum collaborations between Foursquare distillery in Barbados and Velier, independent bottlers extraordinaire in Italy. Plenipotenziario is the sixth such bottling since “2006” was released in 2016.

This rum was distilled in 2007 and officially released in 2019, but it is only now, April 2020, that the rum has found its way into European stores. This combination of “Heavy & Light” rums from Foursquare’s batch pot and traditional column still distillations is presented at a lovely 60% ABV. This latest “unicorn” has been blended in the barrel before spending 12 years ageing fully in the tropics in ex-Bourbon barrels – no double-wood blends in this rum, yielding 6,000 bottles. Although there is no indication of it on the bottle, I would expect an evaporation “Angel’s Share” rate of around 70% or so.

I first tried this at UK Rumfest in October 2019 and loved it there and then, although one of the things about trying rums at festivals is that you taste so many and you are very easily distracted by other things going on, so it is always nice to get hold of a full bottle, drink it and then write about the experience.

Quoting Wikipedia, translating Plenipotenziario “The word plenipotentiary (from the Latin plenus “full” and potens “powerful”) has multiple meanings. As a noun, it refers to a person who has “full powers”. In particular, the term commonly refers to a diplomat fully authorized to represent a government as a prerogative (e.g., ambassador). As an adjective, plenipotentiary refers to something—an edict, assignment, etc.—that confers “full powers”.”

So Richard Seale and his fine rums have “full powers” lol.

As usual when I taste a high ABV rum, I also try it with water added – from a few drops to a decent dilution. I have also tried this in both my regular brandy glass and also my Neat glass.

Foursquare Plenipotenziario is a Single Blended Rum:
A blend of pot still and traditional column still.

By now, the packaging of Foursquare/Velier collaborations look very familiar. The usual beige outerbox and the opaque black tapered bottle. The labels for Plenipotenziario are blue – very similar to Destino although some of the Plenpotenziario’s writing is beige on a blue background, the reverse of some of Destino’s. They still look the same if you know what I mean.

We have the usual host of interesting info about the rum, how it was distilled and aged etc. 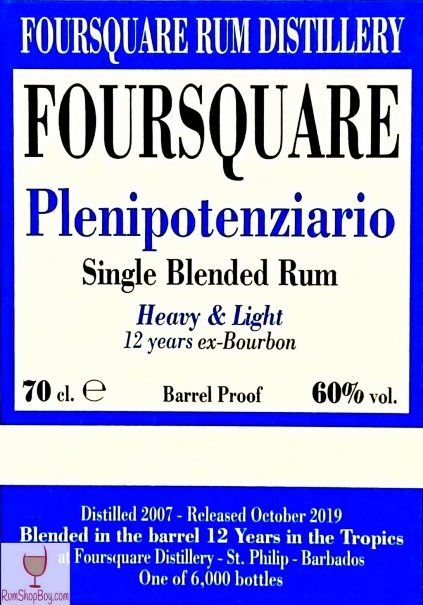 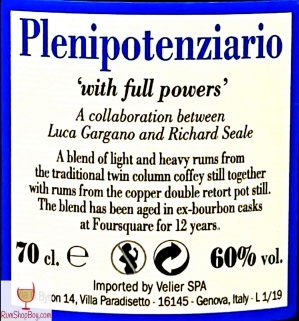 Plenipotenziario is a medium-deep amber with an orangey glow.

The rum has very thick legs on the sides of my glass and the tears are very slow to descend.

The aroma is not overpowering with alcoholic fumes even at 60%, which is something I have started to get used to with fine Foursquare rums. But the overall aromas are powerful – honey, green bananas and varnish initially.

With the addition of a touch of water, the nosing reveals strong tobacco smoke, spicy pepper, nutmeg, chocolate and vanilla.

It is an intense experience.

The entry is buttery and creamy, as if a knob of butter was melted into my glass before sipping. There is vanilla and chocolate on the palate.

With added water, the palate opens up dramatically revealing powerful tobacco, sweet fruity bananas, chocolate and incredibly spicy pepper. It is the pepper that is intriguing as it is more like cayenne, capsicum and chillies, which is a real surprise.

The mid-palate reveals some citrus notes alongside some spice – nutmeg notably, but also some licorice root. Again, adding water intensifies the overpowering pepperiness, which to be honest is a bit too intense.

As the mid-palate pepper and spice grows, the sides of my mouth almost become numb – presumably the high ABV. But it is not an unpleasant feeling.

As the rum heads to the rear of the mouth, Plenipotenziario releases its “Full Powers.” The spicy and smoky notes build and are joined by some balanced oak. There are some fruity hints of pineapple and banana, too.

This rum continues to please long after swallowing…..and I really mean *long*. You can count minutes afterwards when the rum is still glowing inside.

It drifts beautifully between sweet and spicy. Some nice dried fruit notes versus some oak, pepper, chillies and nutmeg – quite delightful.

With the addition of water, there is some burnt caramel too.

Every Foursquare release is exciting but somehow when it is a Velier bottling, the excitement and anticipation overspill. The good thing is that, as a rum drinker, I am rarely disappointed with Foursquare rums – did I really say rarely? I think just once actually but every other release has been outstanding.

The “full powers” of this rum are evident – it certainly lives up to its name with the powerful pepper and capsicum. It also demonstrates what can be achieved through patient tropical-ONLY ageing in ex-Bourbon barrels. With all of the “finishes” and additional woods being used, perhaps we have lost sight of the fact that ageing in ex-Bourbon barrels produces stonkingly good results. This rum also shows off different kinds of distillates – both heavy and light, both of which bring something to this final blend.

My only criticism is that it is at times a bit too intense and whereas usually I prefer not to dilute a rum, I think this benefits from a few drops of water.

That said, as usual, I find myself loving this Foursquare rum. At the moment, probably more than the last one, but probably not as much as the next one. For that is what I have come to expect with Foursquare rums. The current one is the best around, but it only holds that title until the next “unicorn” release.

No pressure there Richard Seale and the wonderful Foursquare Distillery. 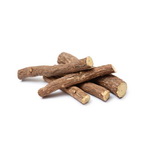 Additive-free, limited to 6,000 bottles and 12 years of tropical ageing. Cask strength of 60%

I wonder if that means the next, seventh release,
will be Cream and a new colour.

Cream and green or Cream and purple perhaps?