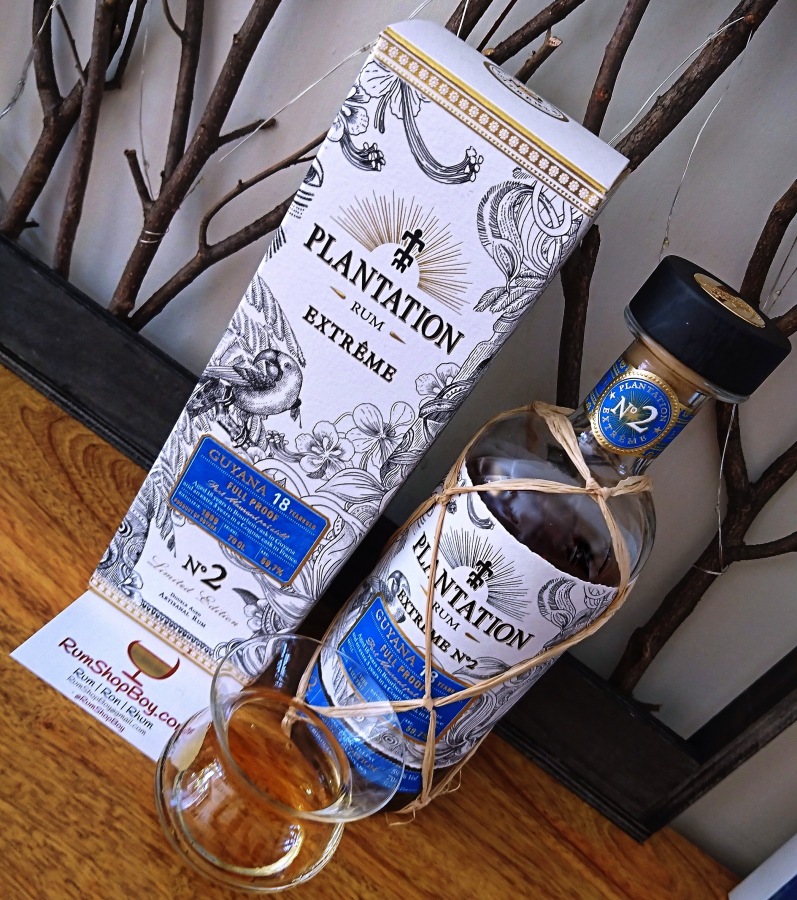 Plantation Extrême No. 2: Guyana 18yo Rum

To anyone in the rum world, Plantation needs no introduction. Their philosophy is to take some rum, ship it to France and give it a secondary ageing alongside a Champagne-style “dosage” of sugar to “finish” it off.

Occasionally, Plantation release some really amazing rums without any “dosage.” The highlight of these expressions are the “Extrême” range.

According to Plantation’s web site:

“Sometimes we find a rum barrel in our cellar that is simply perfect in its natural state. Striving not for balance or harmony, it stands alone for its uniqueness of taste which can only be described as “extreme”. This cask is then set aside and bottled for its sheer exquisite essence, resulting in a very limited edition of what we call Plantation Extrême.”

Being a lover of cask strength unadulterated rums, I was excited to find and buy the second pair of Extrême bottles and today, I am reviewing the second of them – an 18yo bottle from Guyana offered at tasty 59.7%. This rum was distilled on March 23rd 1999, aged for 15 years in ex-Bourbon casks in Guyana and then an extra three years in an ex-Cognac cask in France, replicating Plantation’s dual-ageing technique, familiar to all Plantation rum drinkers. It was bottled on September 8th 2017. The label states that I have bottle number 33 out of just 1,000 produced.

When tested with my hydrometer, it measured between 59 and 60% so therefore has no detectable added sugars, which is reassuring.

Presented in a chic looking outerbox, the bottle contained within looks very “premium.”

It has an oversized stopper embossed with Maison Ferrand on the top and features an artificial cork enclosure.

The bottle has Plantation’s familiar raffia netting around it and the label has lots of useful information (see above) about the distillation and the special nature of this bottling.

The rum presents itself as a medium to dark amber colour. There is a touch of a greenish hue on the surface.

There is tobacco smoke and cherries along with a touch of vanilla.

This rum has a beautiful entry. The smokey tobacco leading to a peppery spiciness.

As this reaches the mid-palate the initial spiciness builds to become very powerful. The high ABV is playing its part. In the background, there is a hint of cream soda, such is the buttery and creamy texture alongside a hint of vanilla.

But as this reaches the rear of the palate, the spice really dominates – lots of freshly milled black pepper is almost overwhelming at first. But add a few drops of water and give this time in the glass and the rum opens out to present banana, crème brûlée and a hint of nutmeg. This is joined by a drying oak influence.

The black pepper is the main flavour here but there is also some oakiness and a touch of fresh citrus that helps to balance the pepper.

Proof that “dosage” is not needed in rum. If the original distillate and resulting aged-distillate are good enough, they taste amazing without the need for adulteration.

I really do love this rum although at £130 per bottle it is pricey. If you are fortunate enough to fine one for sale, expect to pay double that now.

The Port Mourant still has produced a really great end result here but it’s those 15 years of tropical ageing that have given this rum so much character alongside Maison Ferrand’s extra three years in France of course.

As I said with the Plantation Extrême No. 2: Fiji Islands 16yo Rum….. Take a bow Plantation…this is great stuff, but take note for other editions: Stop the “dosage” please…..It is not needed!

One thought on “Plantation Extrême No. 2: Guyana 18yo Rum”