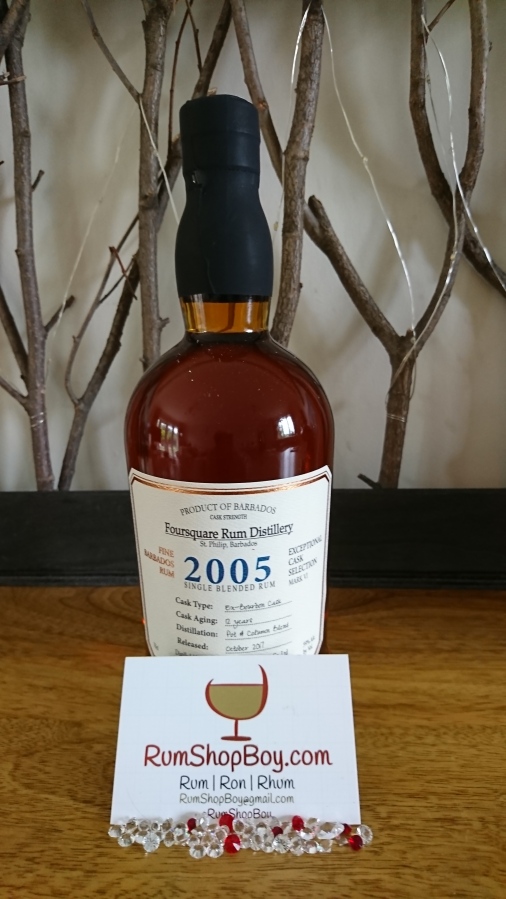 I have written many times before about Foursquare rums, so rather than repeating myself, I will get straight into reviewing the rum I have in my hand today.

I recently reviewed ECS VIII “Premise” and a review of ECS VII “Dominus” will follow.

Number VI in the ECS series of bottles, 2005 is bottled at a mouth-watering 59% and 12,000 have been produced of this Single Blended Rum – A blend of only pot still and traditional column still. The rum has been aged for 12 tropical years in ex-Bourbon barrels and not chill-filtered. This was officially released in October 2017 (according to the label) although it only appeared on UK shelves in May 2018 alongside ECS VII (Dominus) and ECS VIII (Premise).

I was fortunate to taste the new Foursquare rums at UK Rumfest in October 2017 and again more recently in March 2018 at a Foursquare: Exceptional Cask Tasting with Master Blender Richard Seale and his wife Gayle at one of London’s most iconic rum bars, Trailer Happiness on Portobello Road. Having had a couple of tastings, I was eager to get my hands on a full bottle, which I acquired a few weeks ago. I have spent several weeks tasting, testing and most of all enjoying the new releases prior to sitting down to write about them – I always think something of quality deserves time and respect.

My hydrometer test predictably showed zero detectable added sugars, which is exactly what I would expect from a Foursquare rum – I feel cheeky to even dare to test it.

The bottle follows previous Exceptional Cask Selection releases from Foursquare. It is slightly stubby and has an artificial cork enclosure.

I think that the label helps us to see where the value lies in this purchase. Specifically, it highlights the type of rum (Single Blended), the cask type (ex-Bourbon), the length of ageing (12 years), type of distillation (Pot & column [still] blend), the release date (October 2017) and the 59% ABV.

In the glass, 2005 is a medium-dark amber. As always I assume flavour-neutral caramel colouring is added so I am not overly concerned about the final colour.

When poured in a glass and swirled around the sides, there are finely dotted legs that drop down the sides at a slow pace.

The initial nosing literally takes your breath away – this is 59% so that is not surprising. In fact when first poured into my Neat glass, I can smell 2005 from over 12 inches away! At first it is very alcoholic, slightly over-powering, but with time in the glass, and especially if I use my Neat glass, this rum can be appreciated fully. There is vanilla, chocolate, freshly ground black pepper, a touch of citrus and orange peel and a high octane version of the familiar Foursquare-esque toffee. It is oakey with loads of dried fruits, notably plump raisins. It could be a freshly mixed Christmas pudding laced with lashings of rum.

The entry belies the ABV. The first sip is soft and quite surprisingly delicate, completely the opposite of what one would expect with such a powerful nosing. Multiple tastings lead to a development of that ‘oomph’ one should expect leading to a fiery build up with bitter oak notes.

That fiery build up towards the mid-palate never develops into a full on attack or burn, such is the balance achieved by this rum. As soon as it feels like it is going to become fiery, a flavour will kick-in to distract and please you in a different way.

There is an abundance of freshly milled black pepper, spice and ginger. Dark fruits also dominate especially black cherries and bitter plums but also those dried fruits continue through the tasting with the raisin influence being a little like rum and raisin ice cream such is the creamy texture of the rum. There is a touch of vanilla joined by dark and intense chocolate. All of which is balanced by some bitter oak. Absolutely superb!

The rum’s buttery texture continues to the rear of the palate. The rum impresses and surprises throughout. Despite the build up of spice and the potential for a fiery finish, the rum returns to its initial smoothness, even in the finish. The oak lingers long after swallowing, too!

On first tasting, this is not a rum for the faint hearted. Initially, the 59% is every bit that strong and powerful and almost overwhelming. But as is often the case with a good spirit, spend some time and get to know 2005 and it becomes far more like your friend than your enemy. You become accustomed to the power of this spirit and actually grow to appreciate and even crave that power. Where this rum differs from some others at high ABV is that it grows on you with every tasting. Each time I pick up a glass of 2005 I am enjoying it more and more – it really is super stuff!

I do not like to reduce the ABV of a rum, but I found that literally two or three drops of water (in a measure) really opened up the aromas and flavours without dulling the power of this rum.

On the recent #Foursquarett Twitter tasting, I had been suffering badly with hay fever all day. One tot of 2005 cleared my nasal passages and allowed me to enjoy my evening, so one could say that 2005 is medicinal.

I would like to think that this is one rum for one specific occasion/mood and the others in the ECS series are for different occasions/moods.

All are superb, just disparate! If one is marked at 85 out of 100 and another is at 95, it just implies *I* prefer one over the other. It does not mean that one or other is better/worse in quality.

As with all Foursquare rums, this is very keenly priced and represents exceptional value especially when you consider the 59% ABV.