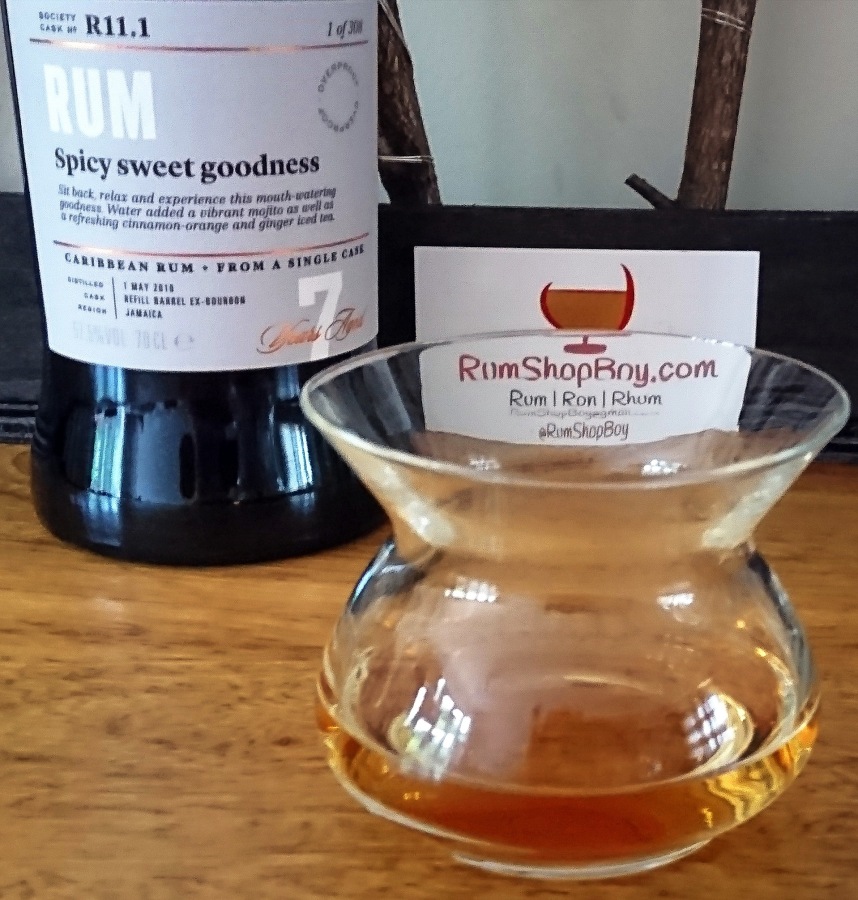 The sixth bottle of my second purchase in 2017 from SMWS is from Jamaica, 7 years old and presented at a warming 57.5%.

The SMWS has a numbering system for its bottlings aimed at concealing the identity of the distillery with the aim of offering a flavour style and profile instead. This may tempt consumers to try offerings from distilleries less familiar to them, due to the consumer buying a flavour style and profile rather than a brand and also that some of the bottles offered may taste very different to what a consumer expects from a specific distillery. I believe that sometimes the distilleries themselves also request that their identity is not publicised on the bottles.

The first number on a SMWS bottle is the distillery number and the second is the cask number.
R11 is from Jamaica – a trusted, reliable rum friend has told me it is from Worthy Park – one of Jamaica’s pot still havens, or should that be heavens? This is the first cask SMWS have offered from Worthy Park.

Under Richard Seale’s/Luca Gargano’s proposed rum categorisation, this would most-likely be classed as a “Pure Single Rum” – 100% Pot Still.

My hydrometer test showed a reassuring 57-58% ABV – the same as the label. I should expect nothing less from Worthy Park.

The SMWS bottles are quite distinctive, presented in a traditional dark ‘bottle’ green colour, with an unusual shape.

The labelling is interesting as SMWS have their own extremely unique way of describing their spirits, which is quite flowery and obscure. As they do not present a spirit as being from a distillery, that info is absent as is the type of still, but what is present is:

The rum presents itself in an unaltered medium amber colour.

Initial aromas offer spicy pepper, rich Christmas pudding-like dried fruits, bitter plums and stewed fruit. The addition of a touch of water brings a freshness to the rum, removing some of the bitterness and replacing it with fruity rhubarb.

The entry is a little bland. It is soft and creamy displaying spicy pepper notes but it does not entice me into the glass for further tastings, unlike other Worthy Park rums I have enjoyed.

It is only as the rum approaches the mid-palate that it livens up somewhat, with a fire building from the spicy pepper on entry. From this also comes lots of bitterness, notably plum-like eau-de-vie, reminiscent of many other pure pot still rums I have tasted.

This is where the pot still notes really come out to play. The ever increasing spicy pepper notes become increasingly more fiery with every sip. It reaches a capsicum-esque pace – I could almost be tasting a raw chilli.

As can often be the case with high proof pot still rums, the addition of a touch of water, literally a few drops in my glass, softens the fire and allows the real flavours to shine through for the taster to enjoy. Imagine the morning after embers of a campfire doused in rain providing a smokiness in this rum. Add in freshly buffed leather and combine it with creamy undernotes and you have this rum when water has been added.

This rum grows on you and the afterburn is good evidence of that, although it does not reach the levels of other Worthy Park rums. It continues to offer up more pepper and spice alongside an increasing dryness long after swallowing.

This is certainly not in the same class as Worthy Park’s Single Estate Reserve & Oloroso Cask Finish rums. That said, it is what I would expect of an unblended, single cask Pure Single Rum – it is full of pot still fire and pepper with little refinement that usually comes from blending, either with other casks or other marques/styles such as column still rums.

This rum has fire and spice and a real presence. But it lacks refinement and it fights the taster into submission unless you drown it with water. I think that this rum would probably benefit from a longer ageing period or at the very least, more tropical ageing rather than that in a temperate climate.

The official description states “The initial aroma was described by some Panel members as funky whilst others visibly reclined and relaxed. Plenty of dark fruits, toffee, caramel, toasted marshmallows before the nutty creaminess of rum baba with poached pineapple and Chantilly cream emerged. A mouth-watering refreshing, although with a distinct heat of Szechuan pepper, made this quite an experience tasting neat. Adding some water the nose turned fresh, almost vibrant, like a lemon ginger mojito and now on the palate so mellow, caramelised rhubarb on toasted brioche and deliciously spicy and sweet like a glass of cinnamon-orange and ginger iced tea.”

I always prefer to nose and taste a rum, writing notes as I do, before I read the description. In this case, I am pleasantly surprised by SMWS’s description – not something I have often said when reviewing their rums.