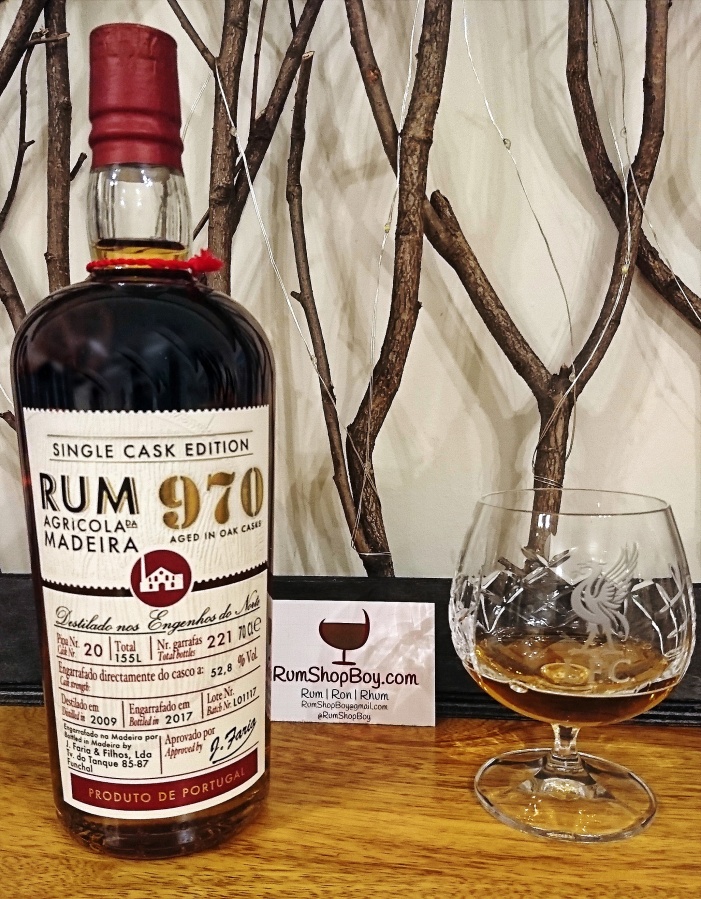 Agricole Rum: Rum from a traditional column still made from cane juice

In mid-2017 I discovered my first rum from Madeira when I tasted the fantastic William Hinton Rum at Imbibe 2017. At the start of 2018 when visiting Think Rum, I discovered another unknown treasure from Madeira – Rum Agricola Da Madeira 970. For me this was the standout rum from Think Rum 2018.

Produced at Engenhos do Norte (Northern Milling Company) at Porto da Cruz using traditional copper stills and powered by steam. 970 is an agricole style of rum i.e. produced from sugar cane juice rather than molasses, and the rums are aged in French oak barrels. There are multiple rums produced including a “white”, “gold”, six year old and an overproof “white”, which is presented at 60% and is a superb sip. Despite being made from cane juice, the producer still uses the word “rum” rather than “rhum” to describe its products.

The one 970 rum that tantalised my tastebuds was the Single Cask variant. Limited, numbered editions of small batch rums from a single barrel are bottled at a higher ABV “straight from the cask” and “with no additions.” The one I tried at Think Rum was one of 129 bottles and was 57.1%. I was told at Think Rum that 970 is not available in the UK and that they are looking for distributors. Not put off by this, I scoured the Internet and found a similar edition to order and that is what I am reviewing today.

Under Richard Seale’s/Luca Gargano’s proposed rum categorisation, this would most-likely be classed as “Agricole Rum” Rum from a traditional column still made from cane juice. Reassuringly, when tested with my hydrometer, I measured 53% implying no detectable added sugars.

Unsurprisingly, being from Portugal, the bottle has a real cork enclosure. The bottle is a slightly stubby style.

I love the info on the labels though. My label tells me that I have one of 221 bottles from cask number 20, which yielded 155 litres. It also shows the rum was distilled in 2009 and bottled in 2017 and the ABV is 52.8%. The rear label confirms that my bottle is number 068 and it also has some useful information about the rum in both Portuguese and English.

970 Single Cask is a medium-deep amber colour with perhaps just a touch of green hues on the surface when you hold it up to the light.

The nose is powerful but also confusing. There are some familiar agricultural earthy and grassy notes as one would expect but there is also something resembling bovril, too. I also detect furniture polish and burnt sugar together with sharp citrus. After time in the glass a metallic aroma appears.

Beautifully soft, light and easy to drink. There is a touch of sweetness and mild white pepper. Some light oak appears but it also has a freshness about it, like the “taste” of skiing through a forest in the Alps after a fresh dump of snow.

As this rum approaches the mid-palate it becomes more viscous and there is a balance between some sugary sweet confectionary, sharp citrus and spicy pepper.

Towards the rear, it becomes metallic but with a dry astringency, too. Guava, banana and honey, but also more lush citrus notes. The alpine forest from the entry has become a spring meadow with grassiness and something very earthy, almost like funghi – think porcini/cep mushrooms.

With more tastings, spicy pepper starts to dominate somewhat and it becomes more and more dry especially when you swallow it.

The rum has a medium to long finish that becomes drier with each taste. But also, the spicy pepper builds as one swallows.

Finding unknown and beautiful treasures such as Rum 970 is why I love the wonderful diverse world of rum. It is also a great reason for visiting trade shows and events such as Think Rum.

This rum ticks lots of boxes for me…..unadulterated i.e. additive-free, made using traditional methods, higher ABV and completely free of marketing b*llsh*t! Add in the amazing price point and you have something really superb.

This is certainly one of the most unusual, and also beautiful rums, that I have had the pleasure to taste and review.

Let’s hope we see more of this and other similar products in the future.