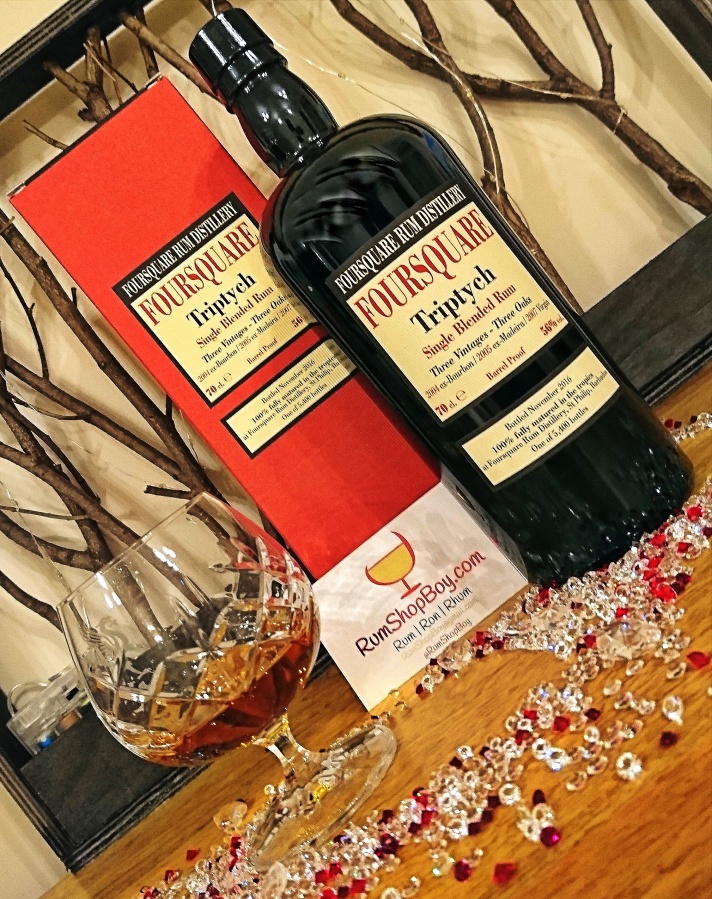 I have been waiting some time before writing about the rum I am reviewing today, Foursquare Triptych, since I feel that the rum itself needs time to be fully tasted and appreciated (more of this later). Only now, late in 2017, having consumed two bottles of Triptych in the last few months do I feel qualified enough as a rum drinker, to do justice to this product.

Triptych is produced by one of the most pro-active distillers, Mr. Richard Seale from Foursquare Distillery in Barbados. Alongside engaging in Facebook group debates, he actually makes some really superb rums, free from additives such as sugar and glycerine and without the current trend towards the obligatory pirate-story or other such marketing b*llsh*t that seems to accompany any rum that is released. The rums produced are a tribute to the history and art of rum making in Barbados and each release shows continual evolution and innovation.

As a long-time lover of anything Foursquare, it is always an exciting time to try any new Foursquare products as I know that 100% of the rum is pure and 100% of the cost of producing the rum goes into the rum itself – surely the most important part of any beverage. This rum is entirely produced and bottled by Foursquare although it has been distributed in collaboration with Luca Gargano at Velier in Italy but it is most definitely a Foursquare rum and just 5,400 bottles have been produced worldwide. It was bottled in November 2016.

When the announcement of Triptych was made, there was much fanfare and discussion surrounding it – Richard Seale himself cautioned the rum community about using the word “hype” in relation to Triptych. To be fair, he had a point since the claims regarding Triptych were honest and genuine, not exaggerated. Triptych did not need incredulous stories to promote it – at this point, I feel like waving my hand like a school teacher, in the general direction of some rum producers who use hype to mask the poor quality of their products. None of that with Richard and Foursquare!

Inevitably when a new Foursquare and/or Velier rum is released, it is accompanied by speculation. In an attempt to ensure Triptych ended up with rum drinkers rather than speculators, Richard himself created an online ‘list’ for us rum geeks to guarantee we all got hold of a bottle (thanks Richard). I am not aware of any other producers attempting such a feat but this was a remarkable effort with bottles being hand-delivered around the world by Richard’s rum “elves.” Despite this, I have seen plenty of bottles appearing on auction sites and even as I write, a bottle is for sale on Amazon for £396.23 (+ £11 shipping). It is impossible to measure the extent to which speculation has been restricted, but what has been guaranteed is that real rum enthusiasts such as myself have been able to purchase a bottle for the actual price rather than being subjected to outrageous mark-ups.

The name of the rum itself is intriguing. An online Google search reveals the following definition:
Triptych
ˈtrɪptɪk
noun
noun: triptych; plural noun: triptychs
The essential theme of the definition of three items linked together is very appropriate in describing the rum, since it consists of three vintages of different single blended rums, each of which have been aged in different types of barrels. Specifically, there is rum from:

Right from the start, we have an intriguing combination of rums, each intended to bring its own set of complexities to the orchestral palate. The art of blending is fully at work here to demonstrate the old adage of the sum of its parts is greater than the individual elements. Before tasting this rum, you have a feeling of it pushing the boundaries of blending since each barrel is bringing something unique to the final end product.

Under Richard Seale’s/Luca Gargano’s proposed rum categorisation, this would most-likely be classed as a “Single Blended Rum” – A blend of only pot still and traditional column still. I could not resist a hydrometer test, which measured a reassuring 56%.

The stubby opaque bottle is in the same style as 2016’s Foursquare 2006 release and is presented in an outer box. The bottle itself looks pretty classy – I am not sure if that is down to the unique shape or the shiny effect created by the glass.

The label, unsurprisingly, has all of the useful rum information needed in order to determine what is in the bottle and if it is good value (or not). Specifically, the aforementioned three blends of rums and three types of barrels used for ageing, the 56% ABV, number of bottles (5,400), the all-important “Single Blended Rum” categorisation and the often underestimated “100% fully matured in the tropics” statement.

In the glass, Triptych is a medium amber with a shiny surface and green hues around the edges. The legs are slightly dotted, not linear. There are small to medium tears around the sides of the glass as I swirl it around and they are very slow to descend the sides.

My first nosing literally took my breath away, but after a few moments in my glass this problem disappeared. It is a fine example of allowing a rum time in the glass to breathe (why should this only apply to wine?). The rum also benefits from the use of a Neat spirit glass.

Further nosings lead to caramel or molasses, more banana and a delicate spiciness similar to lightly ground white pepper, followed by a touch of star anise and something like an old-oak-varnished table.

I could spend forever just nosing this rum, such is the amazing array of pleasing aromas.

The first tasting surprised me at this point as the rum was so soft and subtle that I would have described it as being around 30-35% ABV. A recurring theme of this rum is that it defies belief and surprises you at every tasting. An oak presence is noticeable and gives off a dryness that balances the inevitable Bajan Foursquare toffee flavours, but this is not at all sticky. At first it does feel as if it is about to become sweeter when the toffee kicks in, but the oak holds it back, giving a stunning balance – a tribute to the Master Blender’s abilities.

The more I taste this rum, the more I appreciate that it is offering me more each time. Sometimes, some soft spice or a touch of banana, salted caramel, dark chocolate, candied citrus and ripe cherry.

By this stage, the rum is performing miracles in tantalising the taste buds. It becomes very dry and astringent at points with lots of satisfying tannins. The flavour influences could almost be from an aged Tawny Port cask rather than Madeira – complex dried fruits, banana and smoky tobacco. Some pepper and a doughy flavour accompanied by salty cookies.

The finish is incredibly long with a transformation from slightly sweet with a hint of pineapple and apricot to dry and spicy oak.

At times, it tastes like a fine XO Armagnac and should be appreciated in the same way.

The rum continues to run the fine balancing act between sweet and dry, from fruity to oaky. Long after swallowing the rum glows and warms the back of the mouth and throat.

It does take time to fully appreciate all of the nuances and complexities of this rum. At first, I did not feel suitably wowed with this rum, but by the time I was half way through a bottle, I felt like I understood the drink much better. A tribute to the quality of this rum is that it achieves something that others aspire towards – it improves with every sip and taste. Each time I dip into this rum, it has offered something extra compared to the previous tasting, hence why it has taken me some time to fully love this rum as it deserves to be loved.
For many people, 56% might appear to be too strong and would need to add water, but again, where this rum achieves greatness is that it does not taste or feel as if it is 56% nor does it need/benefit from, adding water to it.
For me, Triptych is as near to perfect as a rum can get. It is one of the finest rums I have ever tasted and for that reason I am naming it as my Rum of the Year for 2017. This is not a decision I have taken lightly as there have been many other fine rums this year – Appleton “Joy” 25yo, Foursquare Criterion, SMWS R9.2 “Paddington Bear’s First Sip”, Adelphi Selection: Hampden 15yo,  Kill Devil Hampden 16yo, Worthy Park Single Estate Reserve and SLD 6th Edition for example. But Triptych has pushed the boundaries beyond other rums I have tried this year.
It will take some beating in the future…..
Speaking of which, at Rumfest 2017, Richard Seale was present and armed with the next installments of Foursquare goodness:

With six years of ageing in ex-Oloroso and three years in ex-Bourbon casks (nine years in total) and limited to 5,400 bottles worldwide.

My initial tasting of this revealed aromas of oak, toffee, burnt molasses and banana. The rum is a medium amber colour with a sweet Foursquare-esque toffee flavour and a soft entry belying the ABV. But this rum explodes into the mid-palate and is full of wood and a dry, astringent feel. There is some peppery spice at the back of the palate and a very long finish. My second tasting revealed some developing citrus notes, too.

A full review will follow when I get a bottle in 2018.

Aged for 14 years, with 12 years in ex-Madeira casks and a final “finish” in ex-bourbon very old rum barrels. According to Richard Seale, “It is a rum finished rum!”

Likewise, a full review will follow, assuming I am lucky enough to get hold of a bottle in 2018.

The next in the Exceptional Cask Series of bottles, the “2005” was also present at UK Rumfest. This will replace or rather follow on from, the “2004“.

2018 looks set to be one to remember for Foursquare Rum!

As this is my last review of 2017, I would like to thank you for reading my rum posts and following my site and wish you a very happy 2018 with lots of love, success and RUM!