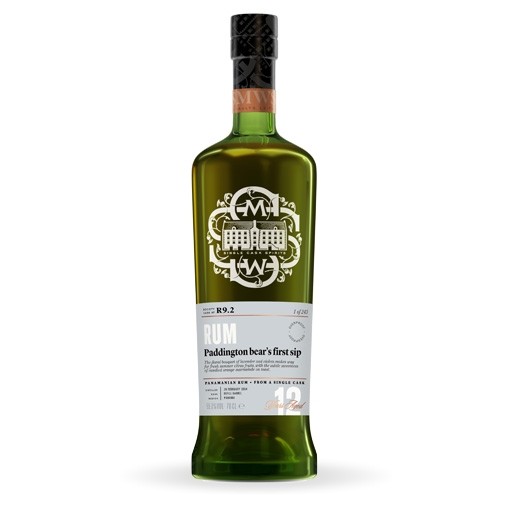 I have recently purchased three rums from The Scotch Malt Whisky Society (SMWS). For background info on SMWS, please see my previous review of SMWS R6.1 “Spice at the Races” (Foursquare, Barbados).

Today, I am reviewing the second of my recent SMWS purchases – a 12 year old rum from distillery number R9 and from cask 2. R9 is from Panama – I am assuming it is from Varela-Hermanos who produce Ron Abuelo. It has been entirely aged in Scotland.

Under Richard Seale’s/Luca Gargano’s proposed rum categorisation, this would most-likely be classed as a “Rum” – from a modern multi column still.

The ABV when measured with my hydrometer is just over 62%.

The SMWS bottles are quite distinctive, presented in a traditional dark ‘bottle’ green colour, with an unusual shape. The labelling is interesting as SMWS have their own extremely unique way of describing their spirits, which is quite flowery and obscure. As they do not present a spirit as being from a distillery, that info is absent as is the types of still, but what is present is the date of distillation (29 February 2004), the type of cask (refill barrel), region (Panama), number of bottles (243) and ABV, which is a whopping 62.0%.

This rum presents itself as a golden to deep amber colour – this is entirely natural. There are medium legs with medium tears that drop down the glass at a medium pace.

The first nosing is quite alcoholic – no surprise, given that it is 62%. But a few moments in the glass rewards one significantly as the rum develops some very welcome aromas. There is a rich caramel and molasses presence with some subtle oak evident in the background. It has aromas reminiscent of a medium-sweet Sherry – hopefully, that does not mean the cask used for ageing was a little wet from the previous contents. There is an abundance of fruitiness – specifically, dried orange peel, but also a hint of fresh pineapple and some tropical mango. There is even some green banana and a hint of citrus, too.

The entry is beautifully delicate despite the high ABV. The initial Sherry-like aromas come across in the initial tasting, too, along with the dried orange. There is a soft and slightly smoky sweetness and a touch of white pepper.

The sweetness persists throughout the tasting but it is not sticky or unpleasant and with the high ABV, it balances the alcohol nicely. The fruit continues to offer lovely flavours…the orange peel still dominates and is not unlike an Appleton rum. The citrus is more prominent here and gives the rum a balance to offset the sweetness. A touch more pepper develops, too. There is an after taste somewhat reminiscent of sugared jelly candies and a feint hint of nutmeg, too.

The afterburn is gentle despite the 62% ABV. The sweet profile continues but as is the case throughout, it is not sticky or cloying. It is a relatively quick finish, though.

I do not know the origins of the name of this rum. I am hoping it is not someone mistakenly identifying Paddington Bear as being from Panama – he was originally from Peru! It could be a reference to his love of marmalade sandwiches, though.

I am not a fan of SMWS’s descriptions of drinks – I find them generally too obscure although this rum’s definition is a little better than most of theirs…
The official wording states “The nose is a florist selling lavenders and violets on a warm spring day outside a busy London underground station in Covent Garden. Next door is a greengrocer selling fresh fruit oozing with the sweet smell of citrus, and with a little water, there’s the subtle sweetness of candied orange peel, nectarine and English marmalade spread on a lightly toasted wholemeal bread that lingers on the palate. A perfect introduction to the delights of rum.” One cannot describe a rum with a reference to the Tube (London Underground) without putting people off, let alone the fact that toasted wholemeal bread is nowhere near the flavours of this rum. That said, the candied orange peel is definitely spot on!

The end result of this rum is exactly what the SMWS wants to achieve. Take a product from a distillery, hide its origins and encourage you to try it based on the flavour profile as opposed to the brand loyalty of liking a certain region or distillery etc. If you have preconceptions about Ron Abuelo, which is produced at the Varela-Hermanos Distillery in Panama, then put them aside and embrace SMWS’s concept with this fine offering. It highlights that a multi-column rum can have an interesting flavour profile and does not have to be artificially sweetened in order to be tasty. I think the 62% ABV helps with this.

Having tasted (and enjoyed) the full Ron Abuelo range, in my opinion, I think this is better than every one of them.