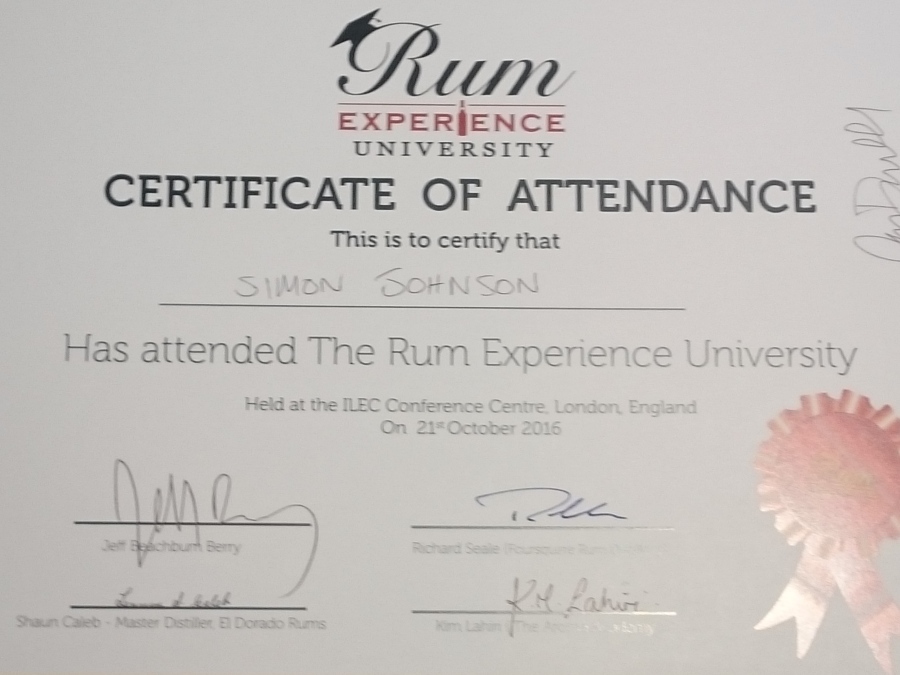 This was my first experience of the Rum University.

The concept behind the Rum University is for ‘students’ to attend four sessions hosted by some influential rum-world contributors and at the end of the sessions, you receive a certificate confirming your participation.

The aroma academy provides aroma kits and courses to help various industries (and individuals) to improve their nosing abilities and techniques. Kim Lahiri is very knowledgeable and experienced in this area and came along armed with a rum aroma kit along with three rums to nose and interpret. The aroma kit is available to purchase for £100, which contains 24 rum aromas to help you to learn how to nose like a pro.

Kim explained a few things to us regarding how the nose works and the way that we can sense various aromas and further develop our abilities to pick out those aromas and put them into words. Some samples of aromas were passed around the room, including a very-easy to identify ‘banana’ aroma. Following this, we sampled some well known rums and discussed identifying the aroma profiles of those rums. There was a very familiar Appleton Rare Blend (12yo) amongst them.

Being a big fan of Demerara Distillers Ltd (DDL), El Dorado and Guyanese rum, this was a real treat to listen to a history of El Dorado from the big man himself, Master Distiller at El Dorado, Shaun Caleb.

Shaun is a very enigmatic and passionate chap who eats, sleeps and breathes El Dorado. You only have to listen for a few minutes to realise that this man cares about his rum…..and anyone who knows El Dorado rums, will appreciate this. His personality is very much a big part of his rums.

The session began with some history about DDL, El Dorado and the various stills present including the only active wooden Coffey still in the world – EHP Wooden Still at Enmore as well as the last two original Wooden Pot Stills still in operation (one Single and one Double), which are at Diamond. The key to these stills being the indigenous Green Heart wood used in their construction. We also learned about the use of their four-column metal French Savalle Still from the Uitvlught Estate, which produces nine different types of rums.

We went on to taste and discuss several ED rums – the 12yo, 15yo, 21yo, 25yo and for the first time in the UK, the £2,750 / bottle 50th Anniversary rum. Shaun was very careful to point out that all ED rums have a guaranteed age statement (i.e. what it says on the bottle is what is in the bottle) but the new ED50 is merely named in honour of celebrating Guyana’s 50th year of independence from Great Britain.

Whilst 50yo rum is in the bottle, it is actually a blend of rare rums ranging from 33-50 years. Shaun told us that only 600 bottles are being produced, presented in a crystal decanter and housed in a nice box, and he has signed each one of them.

After a short break for lunch, next up was Jeff “Beachbum” Berry. Now, let me be honest, I can enjoy cocktails, but it is not something I go crazy for as I am more of a neat rum drinker. But Jeff’s reputation as Tiki-cocktail expert and top mixologist precedes him!

The talk that followed was about some of the influential stories and bar men behind Tiki- cocktails and their origins and history. Jeff is very articulate and obviously knowledgeable about his subject, which was interesting to hear and learn about, being a Tiki-novice. We also tasted a couple of Jeff’s creations/interpretations.

4 “Rum’s Place in the Spirits World” with Richard Seale

To anyone who enjoys real rum, Richard Seale is no stranger. To me, he is one of my inspirations and reasons for talking about rum. Whilst he has a dry sense of humour and can sometimes come across as quiet, almost aloof, Richard’s enthusiasm to produce, promote and educate [about] rum is second to none. Having attended several of his talks in previous years, it was with great anticipation or maybe even trepidation, that I awaited this finale to the Rum University 2016.

Richard doesn’t pull any punches when he is talking. Whilst not naming specific brands, he is quite [rightly] damning of those producers that turn out industrial ethanol, stick it in a fancy bottle full of “marketing b*llsh*t” and dodgy marketing statements, then they call it “premium” and charge you silly money for the dubious privilege of purchasing a bottle.

By comparison, producers such as Foursquare (Richard Seale is their Master Distiller and anti b*llsh*t campaigner) are fighting the good fight to promote real rum, produced correctly where you know exactly what you are getting and that it is genuine.

Richard went into great detail to explain the differences between the proposed re-categorisation of rums and how they are produced.

I had a brief chat with Richard afterwards to point out that in my blog I am categorising my rum reviews using the above system.

Finally, as things came to a close and we were presented with our certificates, I posed for a photo with Ian Burrell. 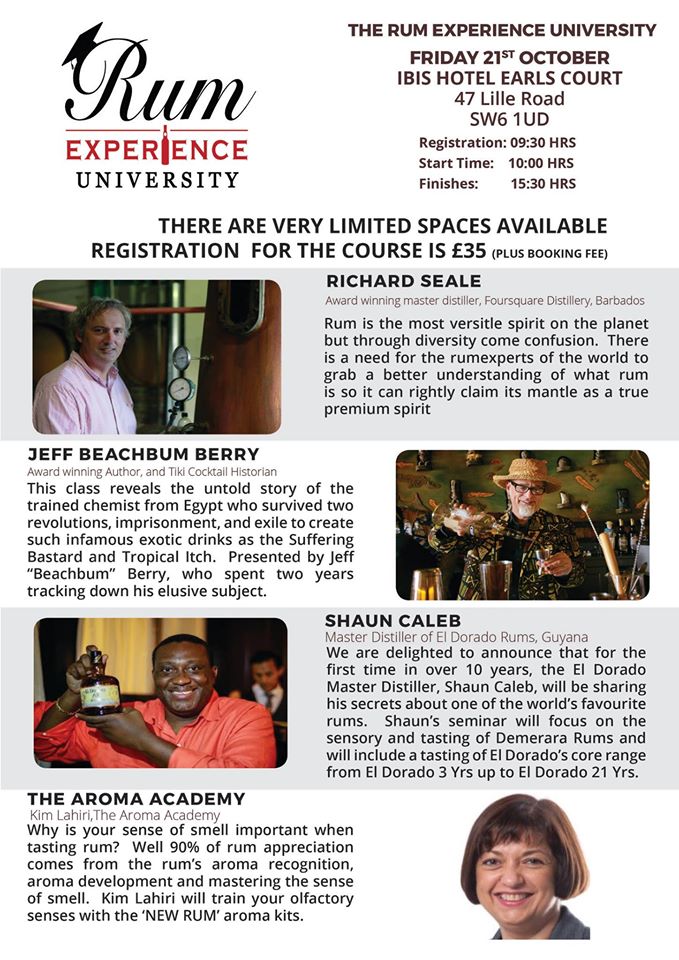