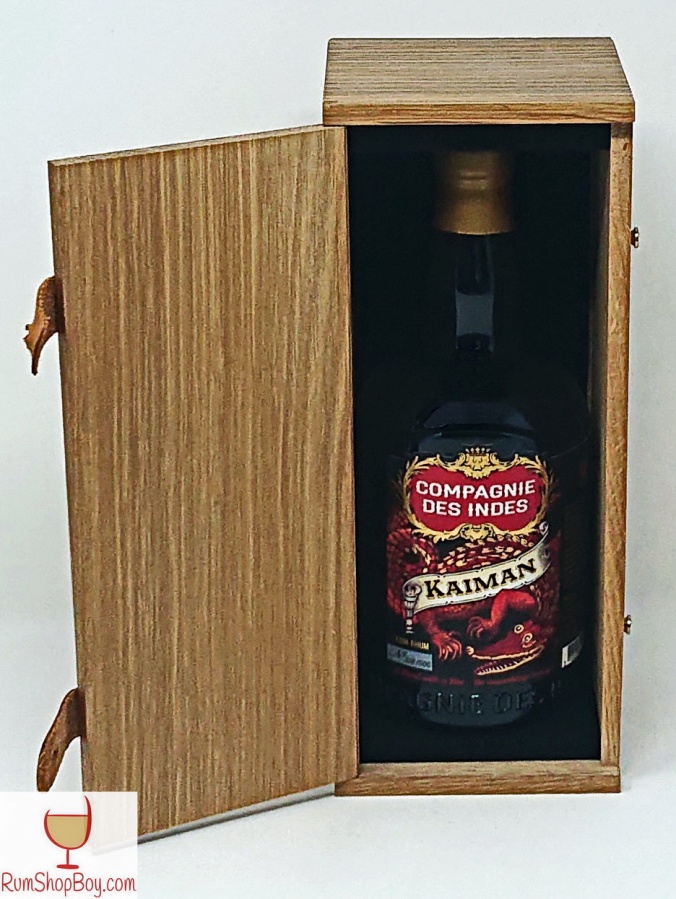 It is always a pleasure to try rums from Compagnie des Indes as I know that it is going to be something honest, good quality and sometimes, as with this bottle, very unusual.

Florent Beuchet, “Creator & Owner” at Compagnie des Indes has crafted a special something to celebrate five years of bottling rums. The specific blend is 1973 Guadeloupe rum, “transferred 10 years ago” to “a single bigger oak cask (1000L), two Guyanese rums from 1993, “blended together in 1995 in Europe then aged in an old rum cask” featuring “rum from three unusual stills; Savalle from the Diamond distillery, Enmore and Port Mourant from Uitvlugt distillery and finally a “Jamaican pot still rum from Wedderburn aged in an ex-rum cask.” The official info even quotes the proportion of the distillates in the blend as follows: “The specific DNA of this blend is as follows: 72.2% 1973 Guadeloupe and 27.8% 1993 Guyana / Jamaica.” The rum is not chill filtered, nor artificially coloured and is limited to just 500 bottles.

Wow, lots of very helpful info about this special blend.

That just leaves the name to be deciphered…..According to Wikipedia a Kaiman or Caiman in English “is an alligatorid crocodilian belonging to the subfamily Caimaninae, one of two primary lineages within Alligatoridae, the other being alligators.” Hence the superb picture on the label.

So, is Compagnie des Indes Kaiman a ferocious old alligator? Or has old age turned Kaiman into a mellow, pleasant experience?

Compagnie des Indes Kaiman is a Blended Rum:
A blend of pot still and traditional column still from multiple distilleries.

For this special edition, we are treated to a premium outer wooden-box. Housed within is the brightly labeled, slightly stubby Compagnie des Indes bottle. The bottle is topped with a wax seal and a natural cork enclosure. The label has a fantastic image of a Kaiman plus info regarding the nature of the blend, the ABV and the number of bottles (Mine is 338 out of 500).

In my glass, Kaiman is a medium amber to gold and quite shiny. There are medium-paced legs.

The initial nosing is Jamaican-esque pot still full of tropical fruits, raisins, figs and dried fruits – it smells delicious. It takes time in my glass for the Guadeloupe and Guyana components to be more noticeable. When they do appear, there is red cherry, licorice and a menthol grassy note coming from the Guadeloupe rum and burnt caramel from the Guyanese rum.

The entry is forgiving with a smooth buttery, almost oily texture. Tropical fruits, oak and caramel.

Towards the mid-palate, the rum develops some bite and I think it is the Jamaican pot still element working its magic.

From the mid-palate the rum’s Jamaican and Guyanese elements dominate. An increasingly bitter oak, pineapple and other tropical fruits make the tongue tingle. Dried fruits lead to glacée cherries and nutmeg. A dryness starts to build as the oak takes control.

In the rear of the palate the spicy notes become stronger – there is a very distinct Port Mourant peppery fire here alongside some bitter plummy eau-de-vie fire. More dry oak with pink peppercorns and licorice.

Port Mourant bitter oak lingers. Some ginger and capsicum and a long controlled finished. There is a burn but it is gentle and refined.

This is definitely an unusual blend – whilst rums from Jamaica and Guyana are often married together, the lion’s share of this blend is from Guadeloupe. As a blend, they were married together for ten years from 2009 until 2019. Consider the overall age of the distillates – the youngest element is 26 years old in total.

The Guadeloupe element is more than likely from the same distillery as the Domaine de Courcelles (1972) I recently reviewed as there cannot be *that* many Guadeloupe rums from 1972/3 that have appeared on the market in the last year or two. That makes the Guadeloupe element around 46 years old in total. What I am pointing out is that the rums are very much in the “old” section of rum ageing – you don’t get many rums aged for much longer.

All of that said, the tasting is dominated by the Jamaican and Guyanese rums despite them being only 27.8% of the overall blend. I presume that the fine Guadeloupe rum is serving more of a controlling, taming-influence over the blend to stop Port Mourant dominating as I find can happen.

This is something that offers plenty of flavours to keep most rum drinkers happy. If you find a bottle at a reasonable price, grab it while you can.

OK, so this is not cheap, but then again, some of the rum is as old as 46 years old. It is a very unique and special blend, limited to 500 bottles, and therefore, I expect this to cost about what it does.