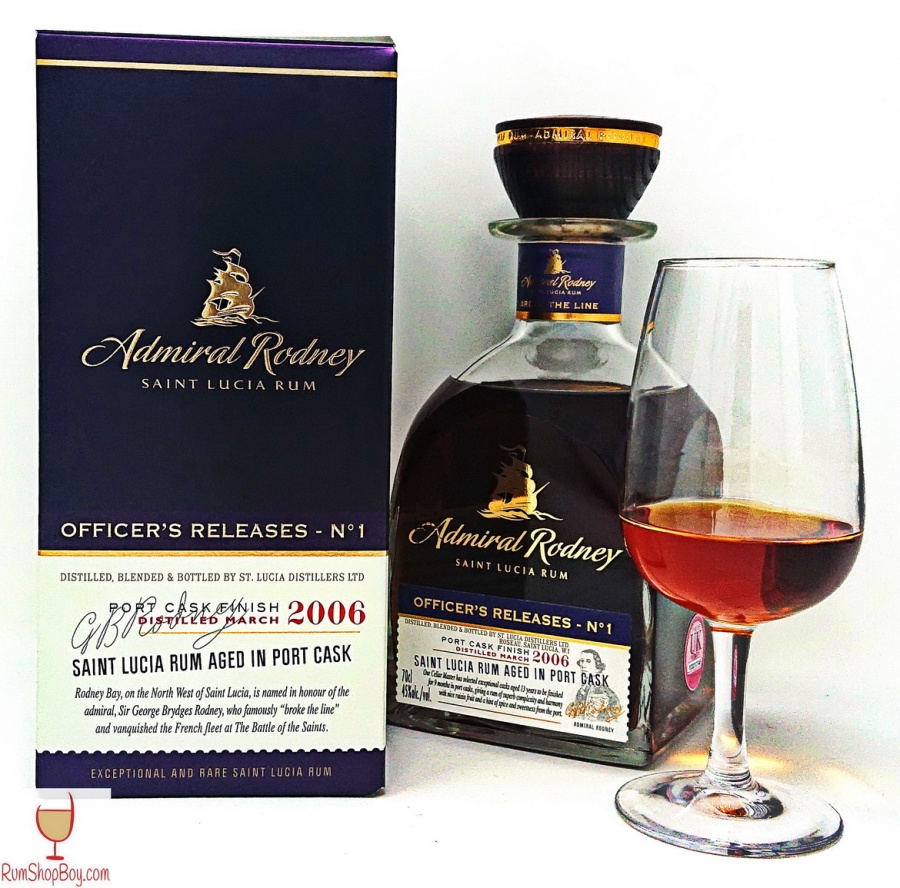 Distilled in St. Lucia by Saint Lucia Distillers (SLD) in 2006 and rested for 13 years in ex-Bourbon barrels before being “finished” for nine months in ex-Port wine cask barrels. This rum has been distilled using traditional column stills and is presented at 45% in “the iconic statutory carafe of the brand.”

According to Brand Ambassador, Dave Marsland, “this limited-edition series pays tribute to Admiral Georges Rodney, a highly-recognised British naval officer who distinguished himself in 1782 during one of the most memorable naval battles in the Caribbean theatre, “The Battle of the Saintes”. Since this particular day, the name of the Admiral Rodney is closely related to Saint Lucia’s history. The island dedicated him its emblematic bay in the north.”

Admiral Rodney Officer’s Release No.1 Port Finish is a Traditional Rum:
From a traditional column still.

Presented in an outer box, the bottle within is square shaped with round shoulders, which looks quite distinctive and follows previous editions of the Admiral’s rums. The box has a fascinating and rousing story about the history of Admiral Rodney – very patriotic.

The bottle has a stunning oversized mahogany stopper on a natural cork enclosure.

There is plenty of info regarding the rum’s creation and ageing as well as some tasting notes.

The rum is a medium amber in colour with an orangey-red shine to it. The legs are a medium density and are medium paced down the sides of my glass.

On the nose, there is sweet caramel, followed by raisins, dried fruits, red fruits and something varnish-esque. There is a touch of oak lurking underneath the sweet fruitiness.

Slightly sweet and light on entry with caramelised fruits. More tastings lead to vanilla and a lightly oaked background. Towards the mid-palate, some light spicy pepper develops.

Through the mid-palate there is a touch of fruity acidity. The sweetness starts to dissipate in favour of a drier astringent mouthfeel. The dried fruits are still there and the oak shines through a touch more accompanied by lightly spiced flavours, which come to the fore with multiple sips.

The rum has a medium finish, with spicy pepper and some dried oak accompanied by a touch of honeyed dried fruits.

The overall theme for me for this rum is easy going. It is smooth, fruity, tasty, light, oaked, spicy but above all, very drinkable. I have had my bottle for a week and have drunk two thirds of it already – I always prefer to spend some time with a rum and preferably not just a small sample, before reviewing it. I think I will be getting another bottle very soon.

This is not a rum for a funky Jamaican pot still 60% ABV rum lover. This is more a delicate rum drinker’s choice but that is what you would expect from a 100% column distilled rum. The Port Cask “finish” brings an extra something to the blend, too, especially if you are a fan of sweeter rums, although at no point is it “spiced-rum-based” levels of sweet and let me stress at this point that there is no added sugar in this blend. In fact, multiple tastings lead to a build up of dried oak coating the cheeks of your mouth.

As an aside, I love the description of barrel ageing as being “rested.” Not sure it is a technical term, seems a bit more like marketing bullsh*t but given the quality of the rum, I’ll forgive SLD and Admiral Rodney. I also enjoy the rousing patriotic story about the history of the Admiral and his part in Saint Lucia’s history.

For £60, you get a rum that has been aged for over 13 years. The addition of a cask “finish” is a nice variant, which again adds to the value.

One thought on “Admiral Rodney Officer’s Release No.1 Port Finish”