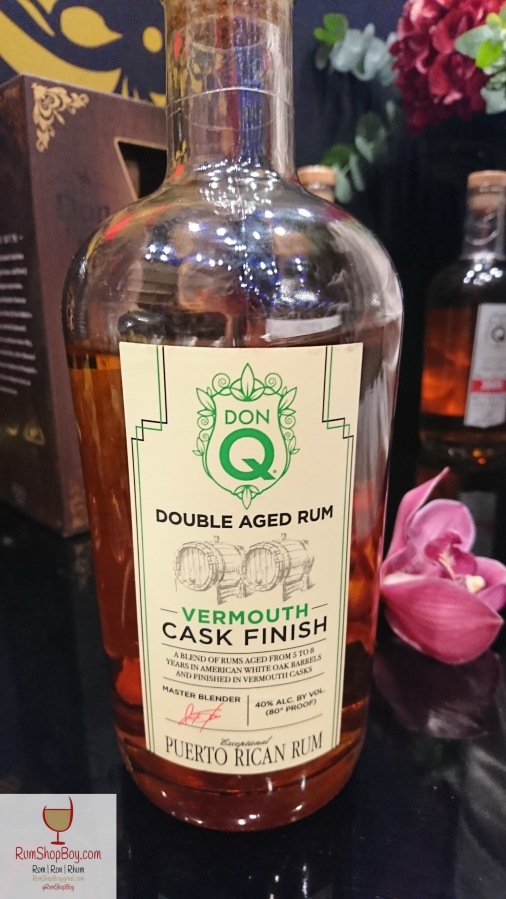 I always enjoy visiting UK Rumfest in October. It affords me the chance to catch up with old friends and rum buddies, meet new ones and of course taste rums, both old and new.

So, when I visited the Don Q stand, I caught up with a familiar face, Global Ambassador at Don Q, Mr. Alexx Mouzouris. Alexx is rightly proud of Don Q rums. They are light in style but Don Q produces good quality and honest rums proving that multi column stills can produce tasty rums when handled correctly.

Having re-sampled the lovely Don Q Signature Release Single Barrel 2005 (released in 2016) and the even better, slightly heavier 2007 (due for release imminently), Alexx had something rather special and unique for me to try. He was in possession of the ONLY bottle in the world (at the time) of Don Q Sweet Vermouth Cask “Finish.” According to Alexx, this is also the first time a rum has been aged/finished in Sweet Vermouth casks – whether or not this is true, I do not know (Alexx insists it IS, so who am I to argue?) but I have not heard of it before so the results would certainly be interesting to try.

This is a blend of rums aged between five and eight years. This is where the lines between secondary ageing and a finish are a little blurred. According to Alexx this rum’s secondary ageing, which is in 600 litre Mancino Vecchio Vermouth Italian Oak casks, the “finish” is just four to six weeks. I am therefore slightly concerned as to just how much flavour can be wrought out of a cask in such a short space of time, but then again, I am not a rum blender/distiller. It is bottled at 40%.

NOTE: Mancino Vecchio Vermouth is well worth checking out. Unusually for Vermouth it is aged (Vecchio means old) and only produced in very small limited batches.

Under Richard Seale’s/Luca Gargano’s proposed rum categorisation, this would most-likely be classed as a “”Rum” – from a modern multi column still. I did not have a large enough quantity to test it with my hydrometer, but Don Q’s rums are not usually tainted.

Presented in the same style bottle as Don Q’s recent signature releases, the label features info about the rum’s ageing, casks and finishing although nothing about the stills.

The rum is a light to pale amber colour. As always I do not pay too much attention to the colour due to caramel often being added, although not in this case.

The legs are medium to heavy and are quick to drop down the sides of my glass.

There is a very aromatic nose to the rum. Rather predictably, it is quite herbal, being a cross between Falurnum and traditional Vermouth. There are lots of dried spices such as cloves and cinnamon bark plus a hint of ginger. Burnt molasses, ripe melon and honey complete the aromas.

The entry is very dry and herbaceous…grassy, but not like an agricole. It actually tastes more like a strong Vermouth at this point rather than rum. It is light and after multiple tastings, becomes slightly sweet.

At this point, I can very distinctly taste the aromatics. I am thinking it is like someone has added some bitters to the rum. The herbaceous taste continues but it is lacking in any rum fire, probably due to the 40% ABV. There is some citrus towards the rear of the palate, in particular some lemon and a touch of grapefruit.

At this point it could be a spiced rum, albeit without the addition of loads of sugar!

This is where I think the lighter style of rum is a bit lacking for me. It is very light as you swallow. Soft and easy to drink. The more you taste, the more dry and bitter it becomes, a little like Campari.

Well, this is a first for me…rum aged in Sweet Vermouth casks! It is great to see rum producers experimenting with different casks and also fascinating to see what these secondary ageings/finishes bring to the rum table flavour-wise.

It is a very interesting experience and I am surprised at just how much flavour comes through from the Vermouth casks from such a short ageing/finishing period.

It will be interesting to see the price point for it (I am guesstimating around £50) as well as how many bottles are released and into what market. When this hits the shops, I think it would become an excellent stepping stone for spiced rum drinkers to move into drinking real rum as this is not too heavy nor difficult to drink, but retains some of the spices whilst leaving the sickly sweetness behind. I wonder if that is what Don Q are trying to achieve.

I think that 2005 and 2007 editions are tastier rums, but this has that unique “wow” factor due it being a first.

I would like to say a big thank you to Alexx Mouzouris for the tasting.