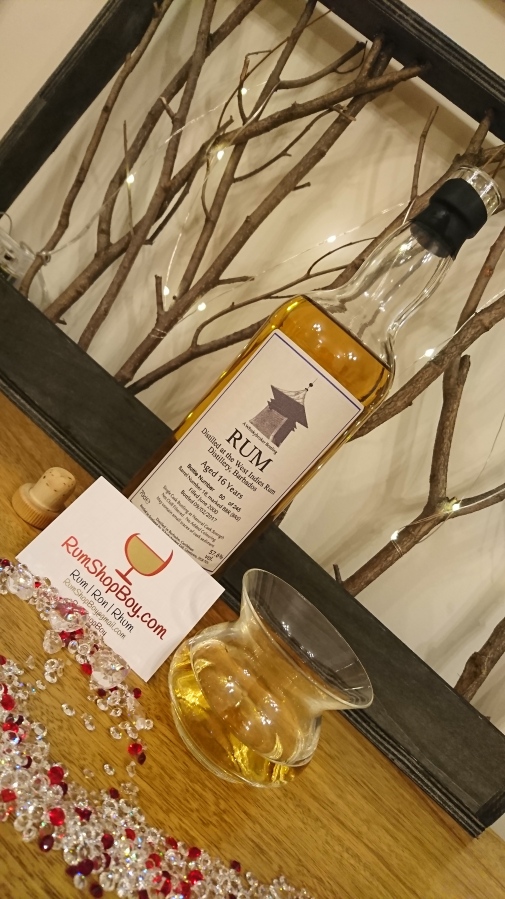 16yo Rum Distilled at WIRD

West Indies Rum Distillery (WIRD) is in the news currently due to its recent acquisition by Maison Ferrand (MF), owner of Plantation Rums and producer of Cognac. The takeover of WIRD is prompting speculation regarding its future in the rum world. It could be seen as a positive move if MF decides to invest in the [currently] run down facilities at WIRD, especially if that involves the use of pot stills in the future. There are also wider implications as WIRD owns a one third stake in the National Rums of Jamaica Ltd, (NRJ) which holds 73% of the shares in Clarendon Distillers Ltd at Monymusk. Long Pond Distillers Ltd and Inswood Distillery Ltd are subsidiaries of NRJ, too (Source). So, MF is gaining access to a set of historic disused stills in Barbados as well as some fine juice already being produced in Jamaica.

With this in mind, I decided it is a good time to review a recent acquisition…..The Whisky Broker WIRD, aged 16 years rum.

In Britain, we do seem to be spoilt when it comes to Independent bottlings of rum. It seems that most indie whisky bottlers have turned to rum, many of which with much success. That said, there are variable results due to the length of ageing that takes place in the Caribbean compared to the European climate. I contacted Whisky Broker (WB) for some info on this bottle, but WB know little or nothing about the history of the barrels they purchase, bottle and sell. Given that WB have not aged this themselves, it is more than likely that much or most of the ageing took place in the Caribbean, but this is my own speculative opinion.

Under Richard Seale’s/Luca Gargano’s proposed rum categorisation, this would most-likely be classed as a “Pure Single Rum – 100% Pot Still. Thank you to Steven James at Rum Diaries Blog for some extra info regarding the categorisation of this rum.

The rum is free from added sugars, as when tested with my hydrometers, the ABV showed exactly the same as the label.

Bottle/Presentation     3/3
Full marks here for excellent bottle labelling. In addition to the distillery and age of the rum being mentioned, I know that I have bottle number 50 of 245 from barrel number 18 marked BBR (BRS). It was filled in June 2000 and bottled on 09-02-2017. Furthermore, the label confirms it is a “single cask bottling at natural cask strength” (57.6%), it is non chill filtered, has no added colouring, yet may contain small traces of cask sediment.

The only thing missing is information about the type of stills used.

Glass/Aroma       8/10
The rum presents itself as a pale amber colour. Without any added colouring, this is entirely natural and the result of the 16 years of cask ageing.

There are medium legs, which slip down the sides of the glass moderately quickly.

Taste, Initial-middle       31/40
It feels like there is an initial pot still punch to it. Hints of toffee and oak are noticeable. Despite the punch, the rum is not fiery at this point. Moreover, it feels quite soft once the liquid goes beyond your lips and to the front of your mouth, although there is a fire building up as it reaches the mid-palate. There is a bright citrusy feel accompanied by vanilla and oak.

Taste, Middle/Throat       32/40
Beyond the mid-palate this rum has real fire. At times it can be a little over-powering – this is coming from someone that enjoys cask-strength Hampden and Caroni rums!!! The fire gives the rum a presence although it is not actually a heavy rum. There is an underlying spicy pepperyness to it although there is also some softer vanilla too, along with a little toffee and caramel, which stops the rum being too dry. There is a slightly medicinal note to it lingering in the background.

Afterburn       6/7
The burn is this rum is superb. There is a delicate balance between being fiery, sweet and oakey. As there is a lot of oak is present, the rum does have a slight hint of bitterness to it though.

Morning After Aroma
There are some slightly bitter plum and fruit notes left in the glass.

Overall
This rum has a real presence to it and is not something that drinkers of light or sweet rums would appreciate. That said, this is a good alternative to other Bajan rums from Foursquare and Mount Gay although I think it generally lacks some of the finesse that comes from those producers.

There is a heavy oak presence, too, which might not be to everyone’s taste although it is fine tasting and of course most importantly of all, untainted from additives.

Once Maison Ferrand formally takes over WIRD and makes its intentions clear, it will be interesting to see what kind of rums wil be produced and where the distillate ends up. Will it simply be used to shore up supplies for Plantation products, therefore diminishing or eliminating supplies for indie bottles such as this? Or could it be that MF will invest in WIRD, restore the stills to a fully functioning state and provide the rum world with some fine quality and artesenal distillate? Only time will tell, but early signs are that it is a positive acquisition…In the future, I will seek out what rum comes from a MF-owned WIRD and compare it to this bottle.