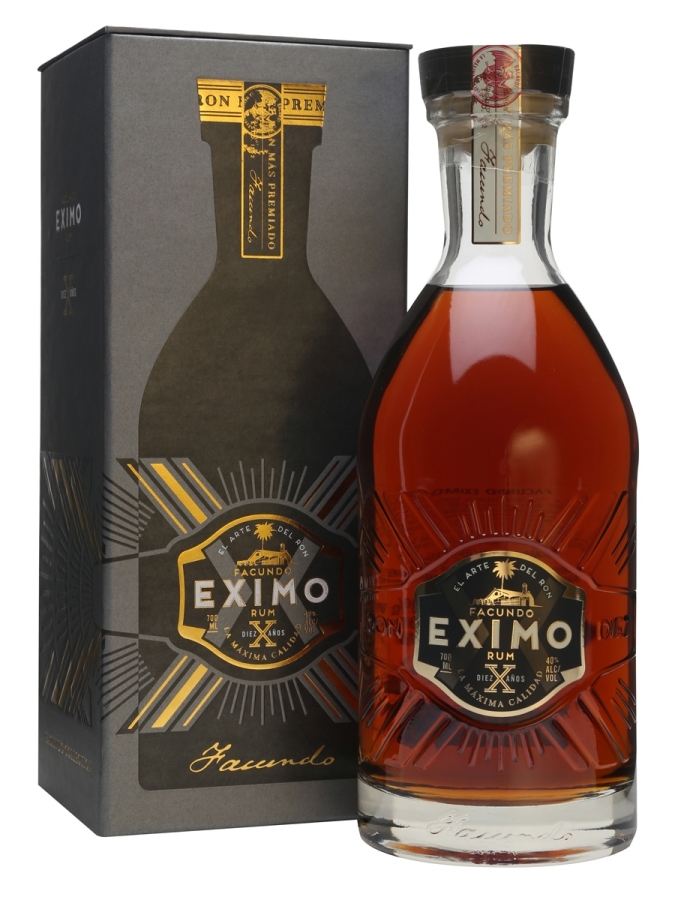 Facundo Eximo 10 Year Old is made by Bacardi, who I am sure need no introduction or explanations about who they are.

My impression of Bacardi is somewhat tainted by their white rum that is widely available in just about every bar and pub and which for me is a significant reason for why rum struggles to gain a better image in the UK. I do not wish to knock Bacardi themselves as they are obviously very good at what they do and hugely successful, but I really do not like their white rum at all. I think that it is essentially distilled to such a high ABV in their multi-columns that very little flavour, if any, remains from the fermentation/distillation.

Possibly aware of people such as myself preferring more artesenal or niche products than mainstream offerings, Bacardi have been expanding their range of rums in recent years and a couple of these have caught my attention. Eximo is part of Bacardi’s Facundo range, named after the creator Don Facundo Bacardí Massó. Having Googled the word Eximo, various translations appear ranging from exempt, remove and extract. According to Bacardi though, they use “free” as the translation, which they go on to explain represents the “freedom to create.” Hmmmmmmmmmm!

According to Master of Malt this is “A 10 year old blend of rums that was blended before it went into the barrel (with a couple of the rums used already being 1-2 years old at the time). This is an incredibly difficult art.” Whether or not this is a difficult art, I do not know as I am not a distiller. I am hoping it is not just Bacardi’s version of marketing b*llsh*t that often infects many rum producers. What we have therefore, is a blend of rums between 11 and 12 years old.

Disappointingly for a company looking to expand into the “premium” or artesenal sector, under Richard Seale’s/Luca Gargano’s proposed rum categorisation, this would most-likely be classed as a “Rum” – from a modern multi column still. Furthermore, my hydrometers say this is 37% compared to the label’s 40%, implying 12g of sugar has been added.

Bottle/Presentation       1/3
The bottle looks far away from the usual Bacardi offerings, definitely a step up in the premium direction. There is a raised “X” in the glass, recognising the ten years of ageing. The bottle has an artificial cork enclosure and it is presented in a smart outer box.

This is where my positive comments come to an immediate halt. There is no info regarding how the rum is made, nor what kind of casks have been used for ageing, no mention of additives, colouring etc. just the story about blending the rums before ageing. Sadly, another bottle with a story to tell about itself rather than the actual rum!!!

Glass/Aroma       6/10
This is a medium to deep amber colour, similar to a Tawny Port in appearance. I generally do not pay too much attention to the colour especially with the frequent use of Caramel E150a in spirits. The rum has modest legs that slide down the side of the glass reasonably quickly. The nose has an abundance of caramel, molasses and Demerara. There is a hint of vanilla and banana in there, too.

Taste, Initial-middle       19/40
The initial taste is quite bland. A little bit of oak  and banana but little else.
After subsequent tastings, the flavours open somewhat, revealing a very sweet profile of caramel, chocolate and fudge – it has a very buttery feel to it.

Taste, Middle/Throat       20/40
In the middle of the mouth a little spice appears, notably cinnamon, but also nutmeg. There is cherry and some bitter chocolate or cocoa. The rum is soft, dare I say it…? Smooth! But there is very little character to it and with further tastings, the sweetness becomes a little sticky in the mouth. There is a medium finish to the rum, which leaves a lingering flavour of honey and chocolate. But, it just tastes a bit lacking, almost as if it is about 30% ABV or even less, like a liquor.

Afterburn       5/7
There is a delicate, soft, but very pleasant warming sensation as you swallow this. A little oak and some toffee balance very nicely. Although the rum itself is lacking, it does linger after swallowing.

Morning After Aroma
A light aroma of caramel and molasses remains.

Overall
A massive improvement on what everyone knows as Bacardi i.e. their white “rum” but compared to other rums that are half the price, this is pretty average at best. Yes, it is smooth, but one has to wonder why it is smooth. Is there added sugar or maybe some glycerine? It certainly does not have many of what I would call “rum” flavours to it, but it is very easy drinking and is a good accompaniment to some ice cream. Added to coke, it is way too sweet though. It leads me to say it tastes more like a dessert than a rum. That is not a problem if you prefer your rums light and sweet, but a pure rum drinker would not order a second shot of this, nor would they spend over £50 on a bottle, especially when you can buy pure rum from Foursquare or Appleton for half the price.

Depending on where you buy this, the price varies massively, from £54 to £100. Even at £54 I would say it is overpriced, but at £100, you are into Appleton 21 year old territory and Eximo is never going to get anywhere close to competing with that. So that leads me to say who would buy this? Well, maybe it is for someone stepping up from the world of sweet spiced “rums” and looking to try something relatively less sweet.

It is not the sort of rum I would want again.

Please note that as I only tried a sample of this, all of the photos on this page are from the Internet, specifically, The Whisky Exchange and Bacardi’s page with info on Eximo.