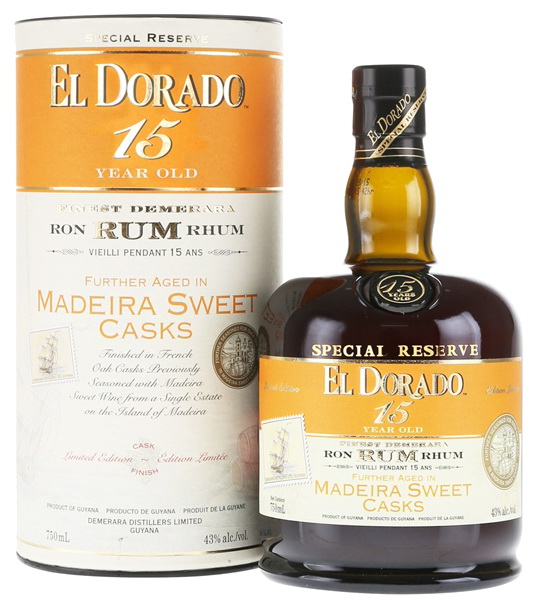 According to Imbibe.com, “just 3,000 bottles of each were produced, with a small share available in the UK from early May” [2016]. “The RRP will be around £200.” They also claim that only 30 of each is available to the UK market. In February 2016, I contacted ED’s UK distributor (Love Drinks Limited) about this and was told that 30 bottles of each were released to the UK market and also know for a fact (as I bought them) that they were £100 per bottle.

The info on the tins claims “at least one year of additional ageing” for each expression. Having searched a bit online, I have found out that each edition has been subjected to 18-24 months of extra ageing. Therefore, that makes every single one of these special editions a 16-17yo rum. Nice!

Inevitably, when tasting these special cask finish editions, I am going to draw comparisons with the original/normal ED 15yo. Also, it is likely that there will be some repetition as there will be many similarities between the editions as I expect to find some subtle differences between each of them, rather than each one being fundamentally and totally unique. With this is mind, when testing each special edition, I have also poured myself a tot of the regular ED 15yo to taste alongside. This has two benefits…..The regular edition of the 15yo can act as a benchmark for comparisons to be made and…..as the 15yo is so tasty anyway, I get to taste it six times more then I would have otherwise 🙂

Just in case I need to point it out…..where I reference ED15, I am referring to El Dorado 15 Year Old Special Edition i.e. the usual edition that most people are familiar with. 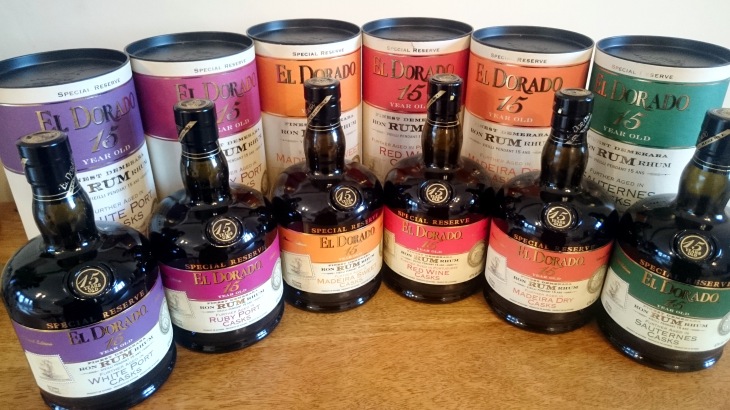 I am testing the ABV of each cask edition with a hydrometer. But, this is being done AFTER the tasting/reviewing so as not to taint or affect my review or opinions. Therefore, the hydrometer/ABV comment will feature after the “Overall” section.

The cask finish being reviewed here is the “MADEIRA SWEET.” For those that do not know, Madeira is a type of fortified wine. It comes from the Portuguese island of Madeira, which has a history of sugar cultivation.

Bottle/Presentation       2/3
El Dorado’s 15yo cask finish bottles are all presented in a similar way to ED’s usual offerings in their “Luxury cask-aged-rum” range. But, instead of the customary outer cardboard box, for the cask finishes, we are treated to a nice shiny tin with El Dorado’s now familiar dumpy bottle contained within, embossed on the upper body with a wax badge. The bottles are similar to the regular 15yo in colouring and style, but the cask finish bottles each have their own unique colouring to match the name of the finish used in these special editions and of course they have the name of the finish. The backs of the bottles have a description of the casks.

As with the rest of the ED “Luxury cask-aged-rum” range, the packaging and bottles look very distinctive and appealing – as soon as you see one, you instantly know which brand it is. They all have nice cork enclosures.
But, unfortunately, the boxes/bottles are missing information about the rums. The age of the blend and the barrel maturation is referenced, but no mention of which types of still are used, nor when it was produced. In addition, there is no mention of the additional length of time the rum has spent ageing in the various different special casks, nor the number of bottles produced.

Glass/Aroma       9/10
The most noticeable thing about this is the orange colour, almost the same colour as the markings on the bottle and tin and certainly more orange than the regular ED15. This looks duller and less vibrant than ED 15, slightly more translucent.
The legs on the glass are medium density and reasonably quick to drop. The aroma is more alcoholic than the ED 15. Getting beneath the alcohol one finds some sweet toffee and a hint of cinnamon. There is a bit more spice on the nose compared to ED 15 as well as some more fruitiness, although not dried fruits like ED 15, replaced with ripe banana and orange peel.


Taste, Initial-middle       37/40
The initial aromas suggest this might taste quite alcoholic, but instead, the tasting is the opposite – it is very soft, and without much of an alcoholic presence. The ripe banana and orange peel aromas are noticeable as flavours as well as soft spiciness…cinnamon, nutmeg and even cloves. It has a smooth, almost creamy or even buttery texture.

Taste, Middle/Throat       35/40
As this reaches the middle of your mouth, the fruitiness becomes a little drier alongside some raisins and tannins. This does not taste similar to ED 15…it has dry oak and toffee alongside more spice and dried fruits. This cask finish is “Sweet Madeira” but the rum does not taste as sweet as ED 15, presumably implying the ABV of this is closer to 43%, which means much less added sugar. In fact, there is a continuing dryness accompanied by more tannins throughout the tasting. As one swallows the rum, that dryness is very evident. As a result, the usual ED 15 fruit flavours are somewhat diminished. The sweet Madeira cask influence does not appear to replace those fruit flavours with anything other than this reoccurring dryness and whilst it it nice to remove some of the ED 15’s sweetness, the remaining flavours are a bit lacking by comparison. But the fact that it is not overly sweet i.e. without tons of added sugar like regular ED15 makes me enjoy this much more. In fact this really does taste great!

Afterburn       6/7
There is an appealing fire to this edition, more so than ED 15. There is some oak, smoke and a hint of toffee remaining.

Overall
This edition lacks some of the flavours of the regular ED 15. This is drier but that dryness removes some of the appealing ED 15 flavours such as the dried fruits, banana and raisins. But, what is left is a really decent rum!

When I first compared this with ED 15, I thought this was lacking some of the wowness and complexity of flavours that makes ED 15 what it is and also what makes it such good value. But, after trying this a few more times, the flavours make you appreciate that an ED15 without the sugar can be amazing and that this is a great taste.

At 2 1/2 times the price of a regular ED15, it is always going to be difficult to justify the value of this – in reality if someone offered me 2 1/2 bottles of ED 15 or one ED 15 Special Cask Edition, it would be hard to turn down the regular edition. This is nice to try and if you like ED15, but prefer it to be dry and do not mind sacrificing some of the fruit flavours, this might be the kind of rum you would prefer.

Hydrometer Tests
When tested with my hydrometers, this came in at 40.7% ABV instead of 43% that is on the bottle. According to Drecon’s sugar conversion table, that means there is around 10g of added sugar in this rum. Compared to the regular ED15, which has approximately 35g of sugar, which is pretty good.