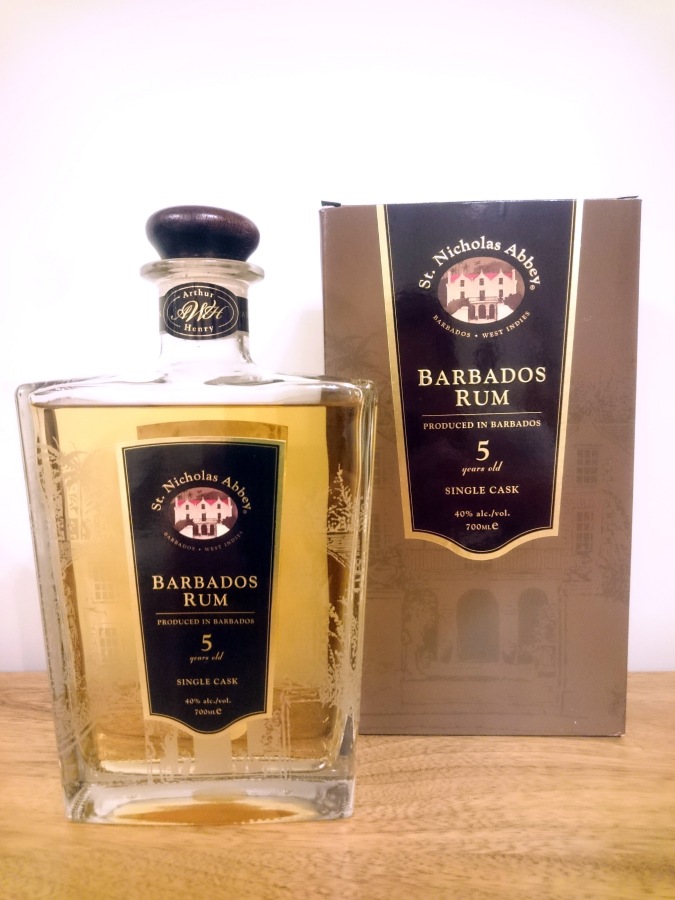 St. Nicholas Abbey was purchased by the Warren family in 2006, who have restored it to its 17th century plantation state. This [5yo] is the first rum entirely distilled by St. Nicholas Abbey – previously, their rums were supplied by Foursquare/Richard Seale. This rum is to commemorate Arthur and Henry Warren, the first generation of “Warrens” to be born at the estate. Makes a nice change from tales of pirates and skulduggery that often comes with rum products.

I first discovered St. Nicholas Abbey rums at Rumfest 2010 (my first Rumfest) and have loved their rums ever since. Prior to 2010, my rum experience was more limited, generally to Jamaica, but tastings of R. L Seale’s and St. Nicholas Abbey opened my eyes to the wonderful world of Bajan rum. This year’s visit to RumFest was similarly exciting, enjoying nice tots of the 5yo, 12yo, 18yo, white and a cask strength 5yo along with Larry – every drop was amazing!

According to Richard Seale’s/Luca Gargano’s proposed rum categorisation, this would most-likely be classed as a “100% Pot Still (Pure Single Rum).”

This was aged in ex-Bourbon casks with no chill filtration. One of the signs of a good rum-producing company is that [on their web site] they proudly reference their distillation methods and techniques. Their production methods stand on their own without the need to spin tales of piracy or ‘Solera’ ageing  as many other brands do.

Bottle/Presentation       3/3
Presented in an elegant crystal decanter etched with an image of the St. Nicholas Abbey Great House, topped with a mahogany cork enclosure and housed in a cardboard outerbox with a label displaying which bottling is contained within. Maintaining the artisinal production of their rums, everything is bottled by hand including etching onto the bottle the barrel number (3), bottling date (17th April 2016) and the bottle number (909).
The artisinal nature and stunning design of the bottle along with the fact that St. Nicholas Abbey are known to only produce pure rum, makes me inclined to give it full marks here.

Glass/Aroma       6/10
Quite a light, pale golden colour with rich legs hugging the glass. The initial aroma is of toffee. There is a dry and creamy aroma along with a hint of wood.

Taste, Initial-middle       33/40
Creamy texture with the toffee aroma becoming the dominant flavour. Despite the young ageing this has lots of flavours but is less complex than the other [older] St. Nicholas Abbey rums. As you take additional swigs the wood becomes more pronounced along with a hint of vanilla.

Taste, Middle/Throat       38/40
This is where the rum is at its finest. The toffee becomes a subtle background flavour, replaced with a very silky, dry and creamy texture. There is a subtle hint of spice and the oak shines through. As it reaches your throat some nice Bajan fire finishes this off beautifully.

Afterburn       6/7
This rum has a dryness along with a soft burn as you swallow it. The finish is medium but continues to impress with the lovely oak dominating.

Morning After Aroma
A faint background of toffee and vanilla is still present.

Overall
As with all St. Nicholas Abbey products, this is pure, amazing Bajan rum at its finest. Whilst it is not quite as complex and evolved as the older expressions, this is superb stuff. The creamy texture is amazing along with some nice toffee and oak. It is not cheap compared to other Bajan rums – Foursquare are always fantastic value. But if you want something a bit special that you know is as genuine and artisinal an offering as you will find, this is worth every penny.
Cheers to Arthur and Henry Warren! I look forward to tasting more rums as they and St. Nicholas Abbey grow up together. Maybe a cask strength offering…..PLEASE!

One thought on “St. Nicholas Abbey 5yo”