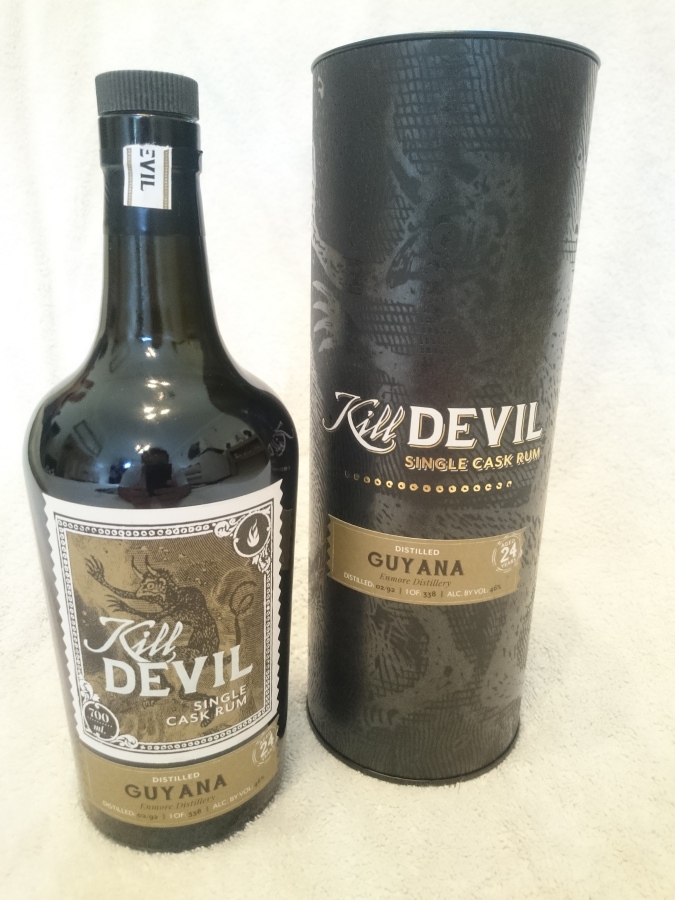 Hunter Laing & Co. Ltd’s rum division “Kill Devil” – another Scottish Whisky producer that has branched out into fine single cask rums. This particular rum was distilled in Guyana by Demerara Distillers Litd (DDL) using the Enmore unique wooden Coffey still in February 1992. After spending 24 years ageing (There is no product information about what it was aged in or where the ageing took place), 338 bottles were produced at 46% ABV. For those that do not already know “Kill Devil” is a term that used to refer to rum!

According to Richard Seale’s/Luca Gargano’s suggested categorisation of rum, this falls into a 100% Column/Coffey Distilled rum.

Bottle/Presentation       2/3
A very distinctive standout design adorns the Kill Devil range. There is a black Kill Devil branded tin with a label attached showing which specific rum is contained within. It is reminiscent of Bristol Rums. A little more info on the production and ageing process would be welcome though.

Glass/Aroma    8/10
The first thing that strikes me about this is the colour. I asked my wife her opinion (she doesn’t drink rum) and straight away she said just how dark it was for rum. Given that there is no added colouring, this is remarkable and shows what cask ageing can do to a drink. Without going close to the glass the aroma is powerful. Initially, you could be mistaken for thinking this was a bourbon. There is a sugary aroma, but not like an El Dorado sugary aroma. There is also a hint of vanilla and summer fruitiness, possibly peach.

Taste, Initial-middle     29/40
Initially, this is super-smooth but does not have a huge flavour profile. The vanilla aroma is present as a flavour and some oakiness but little else. It is somewhat reminiscent of an El Dorado rum – for those that don’t know, DDL own El Dorado and rum from this still goes into El Dorado’s core range of products. But, this does not have the stickiness that one encounters with an ED rum.

Taste, Middle/Throat   37/40
It is at this point that the flavours develop very nicely into a really fine tasting drop of rum. More fresh fruit is apparent together with oak and vanilla and a lovely balance between smoothness and fire. The 46% ABV gives this rum a nice punch on the way through your mouth and that really boosts the flavours.
With a tiny amount of water added, the flavours develop further and give off a nice warm glow.

Afterburn           7/7
This has a really long and lingering finish – it slips down a treat! The oak is more subtle though and it offers a bit of lingering spice. This rum develops more and more as you sip it – the more you do so, the better it gets.

Morning After Aroma
A little hint of spice and toffee is present.

Overall
This is a fine rum and all the more special because it is pure and unadulterated. It is let down by the initial taste being rather bland, whereas for the remainder of the tasting it is very good to excellent. Given the hefty price tag, this rum would have to be perfect from start to finish to justify it though.