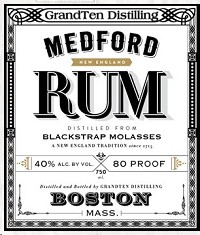 Instinctively, I would say that America is not the sort of place where you are going to find a top quality rum. Sorry, but I think a big US nation-wide distributor would only have something that makes a big profit on their books or they wouldn’t bother at all. But, maybe, as rum is evolving, so too are some of the producers and marketers that are looking to produce small-batch ‘niche’ products rather than just the mass-market commercial products. So, maybe I need to adjust my opinions to suit the changing times in the rum world. Perhaps, this is the rum to do just that…..

It is with the latter opinion in my mind that I have encountered something from New England, which according to Master of Malt is a region that “used to be rather renowned for its rum.”
The company behind Medford Rum is GrandTen Distilling, which also produces gin, whiskey and liquors. Medford’s own web site seeks to evoke the history and tradition associated with rum in New England and references using “blackstrap molasses” and “a blend of wild New England yeast” followed by “small-batch distillation in a copper still”, followed by “ageing in charred American white oak barrels”…..for two years.

Given the uncertain nature of this product, I did not rush out and buy a whole bottle. Thanks to the aforementioned Master of Malt, you can try a taste of a product (3cl) without forking out for a full bottle. So, therefore, I have just one 3cl shot to taste and evaluate.

Under Richard Seale’s/Luca Gargano’s proposed rum categorisation, this would be classed as a 100% Pot Still (Pure Single Rum).

Bottle/Presentation 1/3
Looking at all of the promotional info about this, it is a bog-standard bottle. Nothing wrong with that, but it won’t leap off a crowded shelf if you are looking for something different.

Glass/Aroma 5/10
Orange-red hues in the glass and a powerful, but sweet nose, probably Demerara. It’s quite over-powering, but the sweetness tones it down somewhat.

Taste, Initial-middle 22/40
Initial flavours are subtle vanilla and a heavy dose of Demerara sugar. Given its limited ageing, it is surprisingly smooth at first although as it reaches the middle of the mouth, some roughness is evident.

Taste, Middle/Throat 20/40
It becomes very fiery as it goes from the front to the back of the mouth. Further sugar and caramel flavours develop as well as spice that becomes quite powerful. If evaluated at this stage alone, I would say it is a spiced-rum, such is the amount that the spice starts to dominate. By the time you swallow the rum, the spice is toned down and the rum glows, leaving a very pleasant sensation in the mouth.

Afterburn 4/7
The burn is rough and fiery, but tones down slightly and becomes just warm as it slips down.

Morning After Aroma
Some hints of Demerara sugar remain.

Overall
If this was £15-£20 I would be saying it’s fantastic value, a great rum, probably a little rough on its own, but is a good rum for a Daquiri or even a Caipirinha. But, at £38, there are enough rums that beat this hands-down and cost less (Appleton 12yo, Foursquare Port Cask for example) that would prevent me from buying a full bottle. It’s certainly fascinating to try something different and from a (as far as I am concerned) non-rum-producing region. Maybe in a few years time, they might have a 5yo or 10yo that tones down a little of the roughness of this rum in which case it would sit nicely at the mid-range rum-table.

Find out more about Medford rum on their web site.