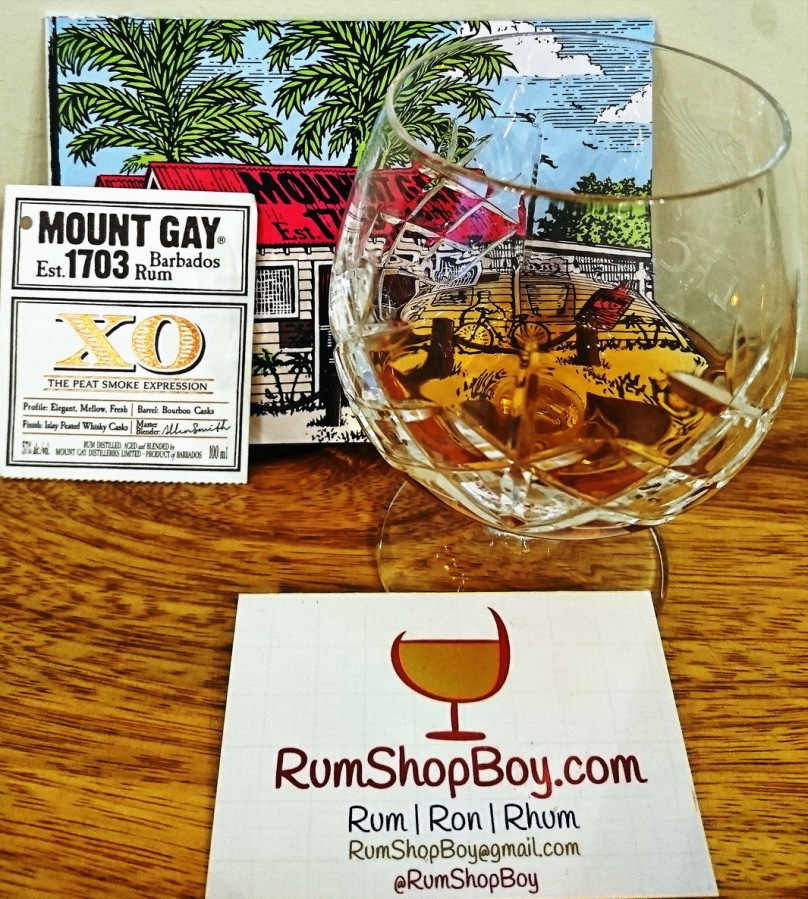 Mount Gay is one of the world’s oldest producers of rum officially tracing their history back as far as 1703. They produce good, clean and honest rums and are one of my favourite rum distillers. I have previously written about their Mount Gay 1703 and Mount Gay Black Barrel expressions.

It is always exciting when a new expression is released and it is especially reassuring to see a distillery continuing to innovate and produce new and varied offerings.

Just 6,120 bottles have been produced at an exciting 57% of this pot and column still blend, aged in American oak casks before being finished in Islay Peated Whisky Casks. I wonder if this is to lure more people from Scotch Whisky into the exciting world of rum. The original XO has a blend of rums aged between 8 and 15 years.

Under Richard Seale’s/Luca Gargano’s proposed rum categorisation, this would most-likely be classed as a “Single Blended Rum” – A blend of only pot still and traditional column still. As is always the case for Mount Gay, my hydrometer test measured the same ABV as the label implying no detectable additives.

The box and bottle follow Mount Gay’s previous limited edition release of a Cask Strength XO. There is a lovely outer wooden box and contained within is Mount Gay’s familiar (to XO drinkers) flask shape bottle.

The label contains details of what we’re drinking – the type of ageing and finish, number of bottles produced (6,120) and ABV (57%). The rear label also references the stills used. 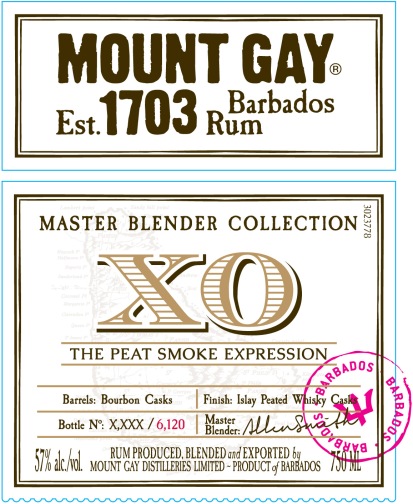 In the glass, the rum is a very deep, rich amber-mahogany colour with a touch of topaz on the surface. Swirling the liquid around the glass reveals small to medium dotted legs that produce larger tears, which are slow to descend the sides of my glass.

My expectation is for this to smell like a peated whisky. Wrong! Initially, the nose is very much like a stronger version of Mount Gay XO with some lovely fruity notes of banana and pineapple, complemented with a light hint of vanilla and some dried fruits. It is the XO, dialled up with a stronger alcoholic offering.

After some time in the glass and also with the addition of one drop of water, the smoky peat influence is apparent. The impressive thing here is that it is subtle, a great balance between traditional XO and smoke.

When this rum touches the front of the tongue, black pepper is evident along with a touch of salted caramel. Some banana and pineapple continue from the nose.

Even at 57%, this is velvety and smooth. There is no burn or roughness, just a sumptuous experience. A touch of chocolate is in the mid-palate and the fruitiness continues.

It is towards the rear of the palate when the fantastic peat smoke appears. As with the nosing, it is not overpowering nor dominant, instead it rounds off what is already an amazing taste experience. It is unmistakable! Some creamy caramel, pepper and charred oak are present, too. The rum feels like it has real body and power to it.

The smokiness continues after swallowing alongside spicy black pepper. For the first time, the 57% ABV is noticeable. Not fiery, nor rough, but you can feel the power of this rum.

This is a fascinating version of Mount Gay’s XO rum. At times it is confusing as those peat smoke notes deceive you into thinking you have something whisky-esque in your glass. But surely, that is the whole idea of having a “finish” or special edition – it adds something extra to your tipple. And the more you sip this, the more you understand and appreciate the complexities of combining rum and whisky notes together. A hybrid dipping a toe in the cold waters of the whisky camp, but the rest of the body is firmly in the warm watered rum camp!

The 57% ABV is really superb. My only ever criticism of Mount Gay’s fine XO rum is that the ABV could do with being higher. Well that criticism is satisfied with the Peat Smoke Expression as it tastes and feels just about ideal.

What we have here is a really fine rum, fantastic quality and flavour. The only downside for most people will be the price point, but ultimately, if you want something exceptional, you have to pay for it.

Looking forward to the next Cask Strength “Expression.”