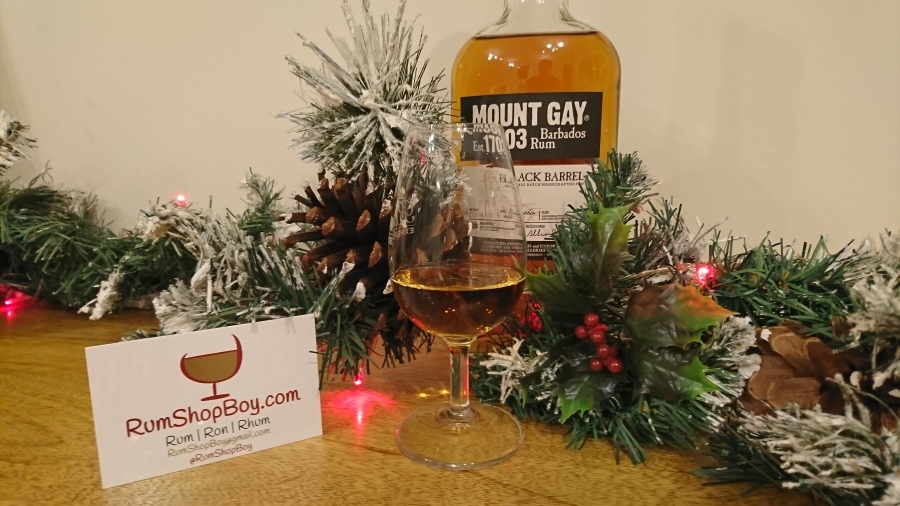 So, what does a rum lover like me do when away in Jamaica?
Simple…..write a review about a Bajan rum!!!

This was actually prompted by a fantastic Twitter tasting session of Mount Gay rums, hosted by The Floating Rum Shack on December 6th, during which a group of avid Mount Gay followers tasted some rather good and unusual rums, whilst comparing notes via Twitter, #MountGayRumTT. Great fun!

So, the day after the Twitter tasting, I extensively tested and tasted the Mount Gay Black Barrel, having already purchased a bottle a couple of weeks earlier. I wrote some notes ready for me to finish off writing while relaxing on holiday in Jamaica. So here is my review…..

Coming from the world’s oldest rum producer and an island steeped in the history of producing fine proper rum, Mount Gay Black Barrel is a blend of rums coming from double pot and single column stills, both of which impart different characteristics to the end product. Having tried the separate pot and column distillates in the aforementioned Twitter tasting, it opens up one’s eyes to the blended end product. The column still on its own is quite light with some hints of toffee and vanilla whereas the pot product has much more power and depth of aroma and a long lingering finish. These two rums are blended together at 43%ABV to create Black Barrel, with a greater proportion of pot distillate compared to column. This is then aged in charred ex-Bourbon barrels, hence the name, Black Barrel. This rum does not have an official age statement, although the rums in the blend are aged between “2 and 7 years” according to Master Blender at Mount Gay, Allen Smith, who I encountered at the 2016 RumFest.

After testing this with my hydrometers, I am happy to report that as far as I can tell, this rum is additive-free. My hydrometers showed 43%, precisely what it should be. Not that I would expect anything else from an honest rum producer and an honest rum-producing country.

Bottle/Presentation       2/3
The bottle is a flattened variety, like a flask, but with an elongated neck, which does look attractive. The front label shows Mount Gay’s distinctive white text on a black background along with some very useful info. There is a bottle number, the types of barrels used for ageing, in this case Bourbon casks and what is in the blend, namely, “aged double pot-still distillates and aged column distillates.” There is also a reference to the pure Bajan spring water used along with a signature from Master Blender, Allen Smith. On the back of the bottle, there is a reference to Mount Gay laying claim to the title of the World’s oldest rum producer along with some more info about the rum’s creation. This is what labels should be like…well done, Mount Gay…fantastic!

Glass/Aroma       8/10
The rum presents itself as a pale amber with a yellowish hue to it. After swirling the liquid around the glass, the legs are quite thin, almost like join-the-dots around the glass. The legs are slow to descend.
The initial aroma is charred vanilla. The 43% ABV is very noticeable as it gives the rum a powerful aroma. There is a delicate sweetness, possibly toffee that is apparent after allowing the liquid to settle a few moments. There is also some soft spice in the background.

Taste, Initial-middle       33/40
A soft initial entry becoming more fiery as it reaches the middle of the mouth. Under this nice fiery hit is some toffee and creamy vanilla, notably the column distillate. With multiple tastings, there is pot still spiciness to this rum, too, which is an excellent balance to the slight sweetness. I can also detect some dried fruits, notably raisins.

Taste, Middle/Throat       31/40
The initial fire continues throughout and the pot still influence really does give this rum some character. The spice becomes more pronounced at this stage, too…there is some black pepper and cinnamon. I was expecting this to be heavily oaked, but the first time I notice any oak is after tasting this five or six times at which point, some more dryness appears. In addition, the higher ABV is very welcome as it helps to elevate the rum to something that leaps out of the glass, engaging your taste buds.

Afterburn       6/7
The recurring theme is that the higher ABV gives this rum some real fire and power. The dry oak is apparent here in a long, lingering finish.

Morning After Aroma
An abundance of charred oak is still present. There is also some dried fruits, notably raisins.

Overall
This rum has both surprised and impressed me. I had a little sip of this at RumFest 2016 and did not pay it much attention, but tasting it more fully at home, I can appreciate that this is a really good quality rum. The pot still gives this rum a real lift above the usual light style of a Bajan rum and almost heading in the direction of Jamaican funky rums.

The 43% ABV is what makes the difference as it gives the rum a fiery presence. Whilst the flavours are straight forward and not as complex as some rums, this is a really top offering, especially when you consider the price point. At around £30, this is fantastic value.

I prefer to sip rums rather than to mix them, but either way is good with this rum. It is great on its own and so therefore, it also makes a good rum and coke – I tried it with equal parts of rum and coke. I also think that it will offer something extra to anyone mixing a rum-based cocktail, especially as it has a spicy presence.