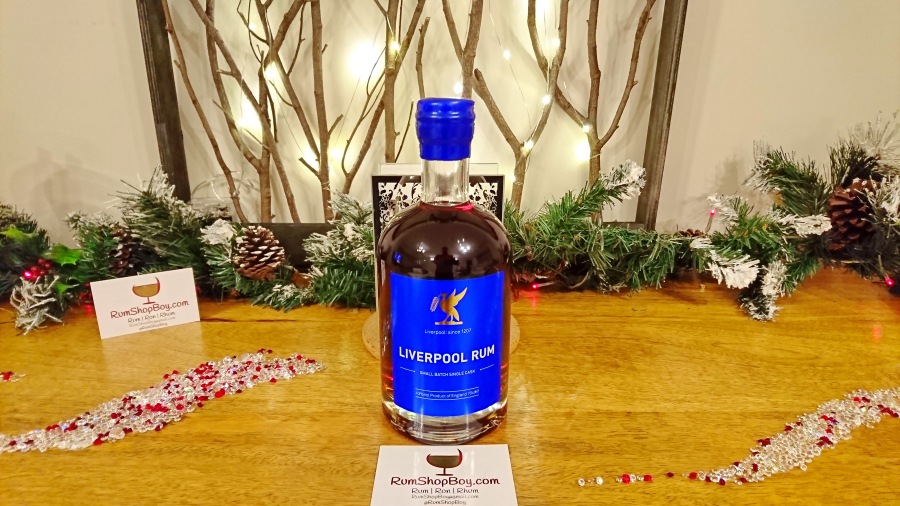 Halewood Wines & Spirits has added some new products to its lineup, including introducing a rum to its “Liverpool” spirits brand that already includes a vodka and three gins. Halewood describe their new offering as “a small batch single cask, 16 year old Trinidad Rum, crafted from the finest Caribbean sugar cane to deliver a rich, full bodied and outstandingly smooth rum.” Halewood state that “the launch of Liverpool Rum was inspired by Liverpool’s rich heritage and culture. It celebrates the brand’s super-premium standards, appeals to rum connoisseurs, and follows on from the outstanding popularity and success of Liverpool Gin.”

My first instinct when seeing this bottle was a look of horror that the word ‘Liverpool’ appears on a blue label – me being a Liverpool FC season ticket holder and passionate football fan, I wondered why it was not red or at least a neutral colour. Being blue instantly alienates a sizeable proportion of the city of Liverpool I thought, such is the city’s colour-based allegiance. Putting aside my own personal preference for the red half of Liverpool, delving into the other Halewood “Liverpool” branded offerings reveals the reason for the blue label…Their gins have a white label and their vodka has a red one, so the labels clearly differentiate each of their products.

This rum includes one year of ageing in the city of Liverpool, so that means the other 15 years have seen the rum ageing in Trinidad. I genuinely think this is a good thing as the Caribbean/tropical ageing often produces far more depth of flavours than European/temperate climate ageing of a similar length of time. Tasting many Scottish single-cask bottlings aged partly in the warm Caribbean and partly in cold Scotland is often proof of this, when compared with similar offerings aged solely in the Caribbean.
This Liverpool rum has been “double matured” and is “finished” in ex-Bourbon barrels.

After testing with my hydrometers the ABV is 41.9% compared to the label stating the bottle is 43%. Therefore, there is approximately 4g of added sugars in this rum.

Under Richard Seale’s/Luca Gargano’s proposed rum categorisation, this would most-likely be classed as a “Traditional Rum” – rum from a traditional column still.

Bottle/Presentation      1/3
Putting aside my own personal dislike of anything blue, the label is simple and uncluttered. On the front, there is a beautiful gold Liver Bird and the words “Liverpool: since 1207” and “small batch single cask” emblazoned on it. The rear label has some historical info about the city of Liverpool’s rich shipping and trading traditions along with some brief notes about the rums creation. I have seen some pictures of bottles with the words “Aged 16 years” in large letters on the front – mine does not include this.
I do prefer bottles to show more info about how the rum was made – type of still, barrels used for ageing, number of bottles etc. In my opinion it is the label info and product’s methods of creation that adds real intrinsic value to a product and helps a consumer to decide if it is worth parting with their hard earned cash or not.
There is a sturdy artificial cork enclosure, with a wax seal.

Glass/Aroma       7/10
The colour of Liverpool rum is a deep amber similar to an aged Tawny Port. I am assuming some caramel colouring has been added but I am not overly bothered about this – we all prefer our rums to look what we perceive as being nice, and a deep dark colour always seems to imply (rightly or more likely, wrongly) that the rum is well-aged. There are some orange hues visible too.

The legs on the glass are very thick and heavy, taking a while to slide down the glass indicating quite a heavy rum.
Initial thoughts on the aroma is that this is a spiced rum, such is the presence of vanilla and hints of nutmeg as well as black pepper. There is also an abundance of caramel and some oak as well as citrus. After leaving it to settle for a few minutes, a pleasant toffee-varnish aroma appears also, almost reminiscent of a Bajan rum.
This is quite pleasant but also a bit sweet on the nose.

Taste, Initial-middle     29/40
The first tasting is quite sweet and viscous, not sticky though. It is very smooth at this point. The vanilla aroma is noticeable as a prominent flavour alongside the oak, black pepper and some pleasing citrus. Further tastings reveal more sweetness, in particular caramel, but there is some molasses in there, too.

Taste, Middle/Throat   34/40
At this point the rum comes to life and has a nice burn and fire to it. The slightly higher ABV is apparent and gives this rum a bit of depth and character. The sweetness continues, but the long oak ageing offers some bitter notes to balance the caramel. The black pepper tingles as you swallow along with a decent but not rough burning sensation, leaving a warming glow after swallowing. This really does remind me of an Angostura rum but without the high levels of added sugar.

Afterburn       6/7
A decent but smooth burn with a medium finish of oak and black pepper. The spices soften as you swallow this, making the burn softer especially with multiple tastings, which reveal more oak and delicate spice.

Morning After Aroma
Some Demerara sugar and molasses present a pleasant but sweet aroma. Some hints of vanilla remain also.

Overall
When thinking of rums from Trinidad, two things leap to my mind – Caroni and Angostura.

Put out of your mind a Velier-style Caroni rum and think more of a decent but virtually unsweetened Angostura rum and that is what you have here. It is very easy drinking if you like your rums on the slightly sweet and vanilla-flavoured side. It is also similar to a Plantation XO 20th although not as sugary. Given the spice, it is a good Winter tipple to warm a cold evening.
At £48 it is good value for a 16 year old rum and sits in the mid-price bracket for a column-still rum although for £3 less I can buy a Foursquare 2004 at 59% by comparison.
The marketing info for Liverpool Rum recommends a cocktail – The “Liverpool Storm” which is a twist on a Dark & Stormy. They recommend a blend of Liverpool Rum, Crabbie’s Alcoholic Ginger Beer (another of Halewood’s brands) and lime. Tasty!