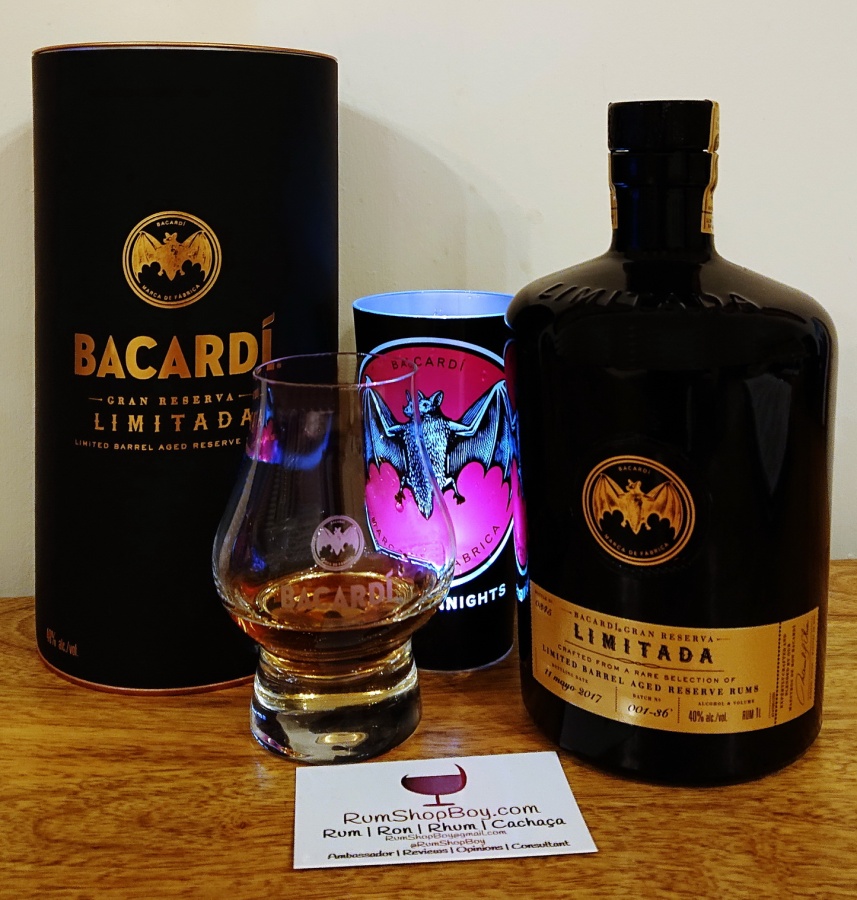 Bacardi will be a familiar name to all rum drinkers. Their “white” rum is in most pubs and bars in the UK and their huge marketing budget ensures their products are always in prime spots in every supermarket.

But, beyond their Carta Blanca, which essentially pays the bills for Bacardi, allowing them to experiment with other products, are a range of aged expressions. I recently reviewed their Bacardi Cuatro but today I am reviewing their Bacardi Gran Reserva Rum, which I purchased from a duty free shop at a Spanish airport.

Aged for 12 years this is blended from rums that were previously reserved exclusively for the founder’s family and aged in lightly charred American white-oak barrels.

Under Richard Seale’s/Luca Gargano’s proposed rum categorisation, this would most-likely be classed as “Rum” – from a modern multi column still.

When researching the product I came across this gem of marketing b*llsh*t:

“Enjoy the most luxurious expression of Bacardi, now available in its new bottle that reflects its Ultra-Premium essence with its solid black glass.”

I am not one to fall for marketing rubbish, in fact I normally like to debunk and dismiss it. That said, let’s try it and see if we are tasting a premium product or experiencing a premium marketing budget.

To be fair, the bottle looks pretty cool. The solid black glass oozes class and quality with various writings embossed on the bottle….. “Limitada”, “1862” and “Receta de maestros de ron Bacardi.” It is presented in a black outer box/tin.

Predictably with Bacardi there is no information regarding the distillation on the box or label. But the label does tell me that I have bottle number 0845 from batch 001-36 that was bottled on 11 mayo 2017. It is a one litre bottle at 40% ABV.

Pale amber to light gold in the glass, Gran Reserva Limitada has medium density legs with tears that quickly drop down the sides of the glass.

The aroma is dominated by vanilla. Some orange peel, light oak, caramelised fruits and apples are present, followed by some Demerara sugar.

The entry is light and quite soft. It is an easy drink to sip with hints of caramel and vanilla. It is smooth but somewhat lacking in any complexity at this point.

As the rum reaches the mid palate, more caramel notes develop along with crystallised fruits. The flavours become a little more complex than was initially apparent….. An oak influence appears accompanied by a touch of light pepper. Banana, chocolate and vanilla linger and are joined by some drying tannins.

The finish is light and easy going. It is medium in length with some oak, pepper and more vanilla.

Bacardi’s foray into aged and more premiumised spirits never seems to be very successful. For such a huge multi-national organisation synonymous with rum, they often do not actually seem to be that good at producing it. Don’t get me wrong, their Carta Blanca is an amazing achievement, one that allows them to experiment with aged expressions such as this. But how much of Bacardi Carta Blanca is down to the product and how much is down to the huge marketing budget? Sorry to be so cynical!

Gran Reserva Limitada is quite drinkable and offers an element of complexity not seen in other Bacardi expressions. But despite 12 years of ageing, it does not quite offer enough. It just does not have that wow factor that one would expect for the price and age statement.

It makes an interesting rum and coke, although other rums are better. It is also not bad in an Old Fashioned although again, there are better rums that one can use.

As Bacardi now own Santa Teresa 1796, if you are looking for this style of Spanish ron, I would suggest you buy one of those instead – much better flavour profile and half the price.