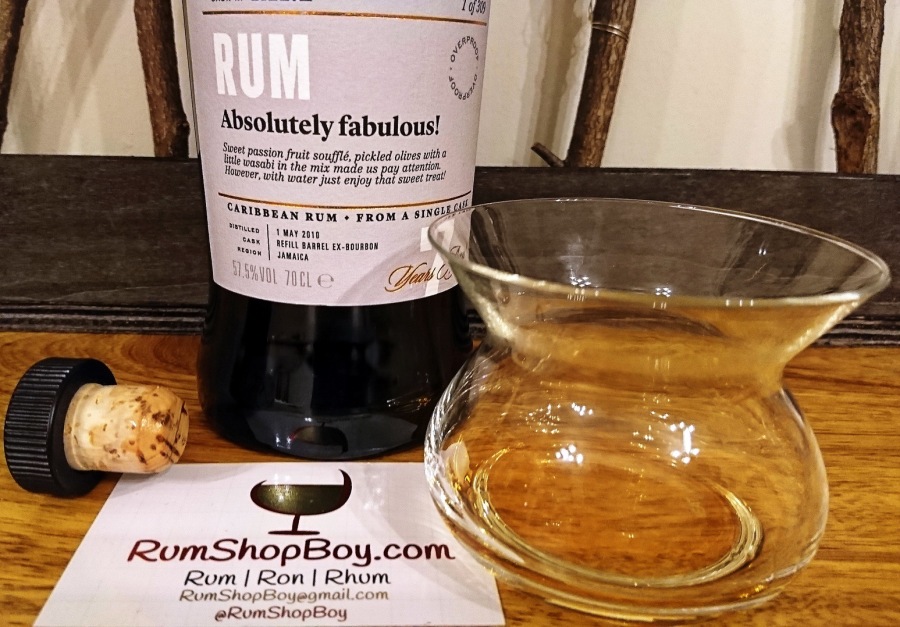 After a break from reviewing SMWS bottles, I decided to return to the ones I had not yet written about, starting with a Pure Single Rum from Worthy Park in Jamaica.

This is the second bottle of my third batch of purchases from SMWS and is from Jamaica, 7 years old and presented at a warming 57.5%.

The SMWS has a numbering system for its bottlings aimed at concealing the identity of the distillery with the aim of offering a flavour style and profile instead. This may tempt consumers to try offerings from distilleries less familiar to them, due to buying a flavour style and profile rather than a brand and also that some of the bottles offered may taste very different to what a consumer expects from a specific distillery. I believe that sometimes the distilleries themselves also request that their identity is not publicised on the bottles.

The first number on a SMWS bottle is the distillery number and the second is the cask number.
R11 is from Jamaica – a trusted, reliable rum friend has told me it is from Worthy Park – one of Jamaica’s pot still havens, or should that be heavens? This is the second cask SMWS have offered from Worthy Park. The first was SMWS R11.1: “Spicy Sweet Goodness.”

Under Richard Seale’s/Luca Gargano’s proposed rum categorisation, this would most-likely be classed as a “Pure Single Rum” – 100% Pot Still.

My hydrometer test showed a reassuring 57-58% ABV – the same as the label. I should expect nothing less from Worthy Park.

NOTE: SMWS’s website lists this as being 66.3% but the label shows 57.5% and is confirmed by my hydrometer test.

The SMWS bottles are quite distinctive, presented in a traditional dark ‘bottle’ green colour, with an unusual shape.

The labelling is interesting as SMWS have their own extremely unique way of describing their spirits, which is quite flowery and obscure. As they do not present a spirit as being from a distillery, that info is absent as is the type of still, but what is present is:

My initial nosing tells me that I need my Neat glass for this rum. At 57.5% it is very alcoholic on the nose and the Neat glass helps to get underneath the alcoholic fumes somewhat. In fact even with the Neat glass, after pouring a tot of this rum, I could smell it from three feet away!

The nose is very spicy – lots of powerful black pepper and also some stale tobacco smoke. Allow this rum some time in the glass and you can get beyond the alcoholic fumes and discover a pot still tropical fruit salad full of raisins, bananas, dates, mangos and papaya. A hint of vanilla-esque cream soda, too.

This rum has power on entry and is not for the faint hearted. Lots of freshly milled black pepper and some caramelised fruits. The rum’s body is very creamy, too.

Towards the mid-palate, the rum’s powerful peppery presence is like thunder when you first sip it. It almost made my mouth go numb initially, such is the power and presence of the spirit.

But rather than continuing to bully you, spend some time with the rum and get to understand it and it becomes your friend, albeit not one you would completely trust. Tame this friend with some water and the fruity nose develops into fruity flavours. The raisins and bananas are there underneath the spicy pepper alongside a hint of Terry’s chocolate orange.

This lingers long after swallowing. The spicy pepper dominates, but is accompanied by cream soda and a touch of bitter oak.

This is not as good as Worthy Park’s Single Estate Rums that are commercially available. Although those editions do not carry age statements, they are more refined blends that are easier to drink. That leads me to my biggest problem with this rum… it is a real challenge to enjoy it properly. There is no doubting the quality of the rum and its production but it is hard to really enjoy it. Unusually for me, I found it needed some water to make it more enjoyable – generally I am happy to enjoy high ABV rums neat.

Maybe it is just too young to enjoy or more likely that that it has not had enough tropical ageing.

“The nose neat offered plenty of sweetness; passion fruit soufflé in a brandy snap basket, mixed berries sorbet with vanilla shortbread cookies and rum crème caramel. However there were also slightly oily, maybe pickled olives or even petrol, aromas lurking in the background – but absolutely “no problem man!” On the palate plenty of spice; ginger pasta with curried sweet potatoes or wasabi-crusted chicken breasts dipped in a teriyaki sauce while in the finish a lingering salted dark chocolate and orange mousse. With water definitely a little petrol garage forecourt or a gas fired barbeque but the spice was now balanced with plenty of the sweet goodness we got on the nose neat – absolutely fabulous!”