I have written many times before about Foursquare rums, so rather than repeating myself, I will get straight into reviewing the rum I have in my hand today.

Number VII in the ECS series of bottles, entitled “Dominus” is bottled at 56% and 6,000 bottles have been produced (UK/Europe) of this Single Blended Rum – A blend of only pot still and traditional column still. The rum has been aged for 10 tropical years in a combination of ex-Bourbon (seven years) and ex-Cognac barrels (three years) and not chill-filtered. This was officially released in January 2018.

A symptom of the lack of chill-filtering and something that apparently is endemic to higher proof rums is the forming of a haze or something that looks a little gloopy in the bottom of the bottle. I recall some comments in a rum Facebook group where Richard Seale commented on why haze exists in rums.

Here are his direct quotes on the subject:

1 “Usually means some very complex long chain compounds have formed that are not very soluble at low proof. Typically removed by aggressive chill filtration at low temperatures. Shake and they should disappear.”

2 (Discussing Appleton 21yo) “Most rum producers don’t use pot still and make complex distillates. You need complex distillates to have hazes appear. If you look carefully you will find it. The rum needs to sit still and the cooler the better. After 21 years batches will vary. The filtration will likely be the same for each batch. And you need aggressive chill filtration to remove the chance of haze.”

3 “Chill filtering will reduce the chance of haze in low proof spirits (< 50% abv). You need to chill filter if you do not want haze. And the lower the temperature, the better the filtration. Haze does not indicate a ‘well distilled’ rum but it certainly does not mean a bad one.”

4 “Foursquare rums with pot still will haze at low proof like any other pot still or heavy column rum. It is about the filtration. Chill filtration removes the compounds that cause haze but they are part of the flavour.”

The bottom line is that the “haze”-like particles are not a bad thing and show that the rum has not been chill-filtered, a process that generally will reduce the overall flavour of the rum.

Here are some pictures I took of one of my bottles of Dominus with “haze” in the bottom of the bottle. 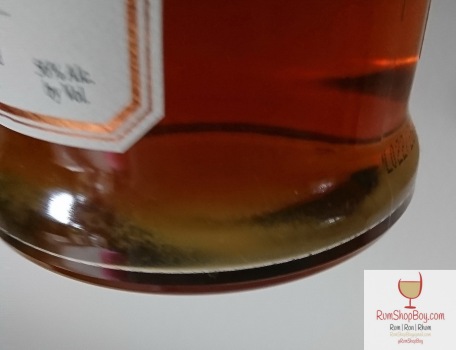 I was fortunate to taste the new Foursquare rums at UK Rumfest in October 2017 and again more recently in March 2018 at a Foursquare: Exceptional Cask Tasting with Master Blender Richard Seale and his wife Gayle at one of London’s most iconic rum bars, Trailer Happiness on Portobello Road. Having had a couple of tastings, I was eager to get my hands on a full bottle, which I acquired a few weeks ago. I have spent several weeks tasting, testing and most of all enjoying the new releases prior to sitting down to write about them – I always think something of quality deserves time and respect.

My hydrometer test predictably showed zero detectable added sugars, which is exactly what I would expect from a Foursquare rum – I feel cheeky to even dare to test it.

The bottle follows previous Exceptional Cask Selection releases from Foursquare. It is slightly stubby and has an artificial cork enclosure.

I think that the label helps us to see where the value lies in this purchase. Specifically, it highlights the type of rum (Single Blended), the cask type (ex-Bourbon and ex-Cognac), the length of ageing (10 years), type of distillation (Pot & column [still] blend), the release date (January 2018) and the 56% ABV.

The rum’s entry is beautiful. There is a pinch of spice followed by Demerara sugar and caramel with a hint of vanilla. It is soft and delicate.

Vanilla and well balanced oak notes in the mid-palate. The orange peel and dried fruits from the nose are present.

Towards the rear of the palate, the spice builds but stops well short of becoming fiery or rough – just well-balanced. More dried fruits continue to develop alongside a touch of dark chocolate.

Long, lingering after swallowing with a touch of ginger and more dried fruit notes. Alternates between sweet, dry oak and fruity spice.

Inevitably, with three new releases from Foursquare being released simultaneously, comparisons are being made between the three new bottles. In my opinion, this is wrong as these three new bottles are entirely different and each one represents the next line in a series.

All three of the new ECS bottles are amazing, but each is very different in style and flavour profile. Every rum drinker will pick a favourite amongst them but that does not make one of them better than the others.

I would like to think that this is one rum for one specific occasion/mood and the others in the ECS series are for different occasions/moods.

All are superb, just disparate! If one is marked at 85 out of 100 and another is at 95, it just implies *I* prefer one over the other. It does not mean that one or other is better/worse in quality.

That said, for me personally overall, Dominus just has the edge, but if I am in a laid back, easy-going mode, I would pick Premise. And if I want to blow myself away with something powerful yet approachable, I would have 2005. That is the beauty of this collection – something for every occasion.

As with all Foursquare rums, this is very keenly priced and represents exceptional value especially when you consider the 56% ABV. Close your eyes and it could be a top of the range XO Cognac, not that I want my rum to emulate a Cognac flavour, but I *do* want my rums to be appreciated in the same way as drinkers do with an XO Cognac. Dominus is the type of drink that would be right at home as an after-dinner drink on a menu full of fine brandies and whiskies.

From the moment I first tasted Dominus I thought it was amazing. That opinion has not changed (two bottles later)…In fact if anything, it gets better and better and easier and easier to drink and enjoy.

I think we already have a contender (or three) for rum of the year and it is only July. Dominus has an exciting intensity and is reminiscent of something between an XO Cognac and a fine Oloroso Sherry – simply beautiful.