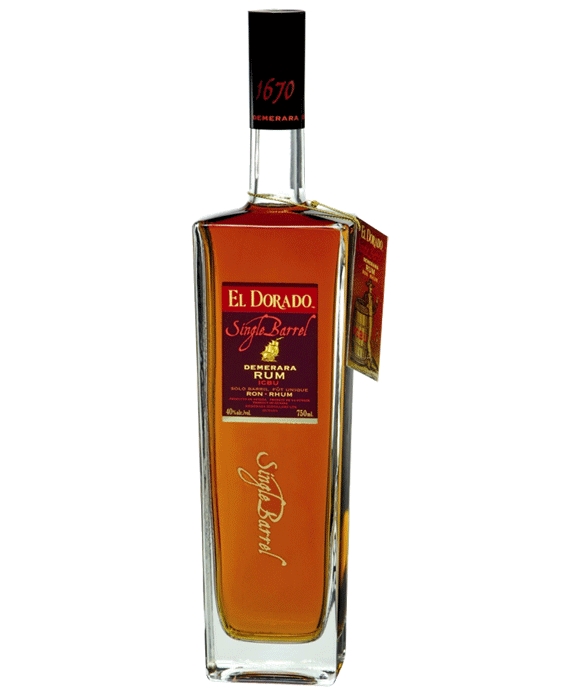 Described by Demerara Distillers Limited (DDL) in various forms such as “Connoisseur Range”, “Heritage Rums” and “Single Barrel” editions, DDL released three bottlings celebrating their historic sugar estates and stills, each of which showcases a different type of still and hence varying flavours and styles of rum. Although DDL have stated that these rums were “distilled and aged in small batches” there is no information regarding the number of barrels/bottles produced, nor any details regarding the length of ageing. Obviously, this this rum is not just from a “single barrel” but is meant to showcase rum from one of their many varied stills, in this case from DDL’s continuous four column French Savalle Still, historically linked to the linked to the eighteenth century Uitvlugt Estate.

Disappointingly, this rum has been altered. When tested with my hydrometers, I am getting a reading of 38% instead of the 40% stated on the bottle. According to Drecon’s sugar conversion table, that means there is around 8g of added sugar in this rum. Not a huge amount by any means but given the nature and implied purity of this rum, it is sad that something has been added that is not referenced on the bottle.

Under Richard Seale’s/Luca Gargano’s proposed rum categorisation, this would most-likely be classed as a “Rum” – rum from a traditional column still.

Bottle/Presentation 2/3
A very distinctive and unusual bottle shape…rectangular with a tapered top and a very sturdy bottom. There is a welcome cork enclosure.
But the bottle is completely bereft of ANY information beyond the name and 40% ABV. The saving grace here is that there is a label hung around the bottle’s neck with some historical information about Demerara Distillers Limited (DDL), El Dorado, the Uitvlugt Estate and the French Savalle still featured in this bottle.

The label mentions the cask ageing but does not mention the length of ageing.

Whilst completely different to El Dorado’s usual range, it is very distinctive and does look quite ‘premium.’

Glass/Aroma       5/10
This rum presents itself as a medium amber, akin to a Tokaji wine or even an Amontillado Sherry. Initially, the legs are quite faint, but after multiple swirlings of the rum in the glass, the legs have more of a presence and form heavy droplets sliding down the sides of the glass.

My first nosing reveals quite a powerful alcoholic aroma. Getting underneath this I can find vanilla, quite a bit of oak, a hint of citrus and some spice. Further testing and there is some smokiness to this rum, too. It is almost like a stale kind of ashtray smoke, rather than something fresh and vibrant.

Taste, Initial-middle       35/40
Moving on to trying this rum, which initially offers a surprisingly fiery entry to the mouth. This is not a rough feel, and in fact it is balanced quite nicely with some Demerara sweetness. The spice has a presence here, notably cinnamon and some mild vanilla underneath this. Further tastings reveal some citrus offering a little bitterness but alongside some oak and caramel, once again ensuring this rum has a balance – not too sweet, nor dry nor bitter.

Taste, Middle/Throat       30/40
The initial fire continues right through the tasting and once again provides some balance, preventing this rum from becoming too sweet. The spice is more pronounced at this stage, with nutmeg, cloves, black pepper and some more smokey tobacco evident. The oak continues, but at this point, the rum has a little more bitterness, coming from hints of plum and possibly even some anise.

Afterburn       4/7
The fire continues to be well-balanced and this rum has a long smooth and dry finish to it. The tobacco becomes more noticeable, which detracts from the tasting, but the spicy notes continue to tingle in the back of the throat long after tasting.

Morning After Aroma
Some Demerara sugar and a hint of vanilla are noticeable.

Overall
I think this particular expression is an interesting insight into the variety of types of Demerara rums that can be produced. Far away from the regular range of El Dorado rums, but equally, a million miles from the flavour of the Enmore and Port Mourant stills. Given this wide flavour profile at DDL’s disposal, it is no wonder that they can produce rums with intense and varied flavours. Although this rum does have a decent bit of fire, it is still a little tame. I feel that a raised ABV would really bring this rum out of its shell (or cask) and it would really make a statement of intent. As it is, the ‘statement’ is a little muted or watery.

The downside of this particular rum is the fact that it has been altered as is shown by my hydrometer reading. Although it is a fraction of the added sugars that we encounter in an El Dorado 12, 15 and 21yo. Given that the rum does not have an overly sweet profile, I can possibly forgive or understand the reason for a little sugary addition, although my biggest issue with it is that it [added sugar] is not mentioned on the label nor in any official info from DDL.

Add what you like, but tell us about it or risk losing credibility when rum reviewers such as myself highlight it.

Having tasted the entire El Dorado range, I think these Single Barrel offerings from the “Connoisseur Collection” are better than the recent (2016) “Rare Collection” ones. My main reason for saying this is that the Connoisseur Collection are far more drinkable, not just down to the ABV, but they appear more rounded and smooth. At times the Rare Collection almost taste as if they are over-aged or that the barrel-ageing has not improved the rums sufficiently. One thing for sure is that these Connoisseur rums are long gone…if you see them on the dusty shelves of a shop, buy them!!! I think there will be more of these kinds of offerings [single barrel, unblended] from DDL in the future, but whether they will mirror the styles of the Connoisseur or Rare ones remains to be seen. Or maybe, DDL will give us something entirely different – unsweetened ED21yo would be nice, perhaps at 55-60% ABV.
I won’t hold my breath though!